[A New and Correct Chart of Cork Harbour (This is the rare 18th century Map of Cork Harbour which also shows Haulbowline Island, which is the original location of “The Royal Cork Yacht Club”, later “The Water Club of the Harbour of Cork”, the Map shows also the Old Head of Kinsale, Crosshaven Harbour, Haulbowline Island, Curraghbinny, Spike Island, Ringaskiddy etc.)] – Correct Title of the Map: “A New and Correct Chart of the Harbour of Corke by the Revd. J. Lindsay, Late of His Majesty’s Ship Fougueux”. There is an inset Map showing “A Continuation of Corke Harbour from a smaller Scale”. The scale of this reads “A Scale of three English”. Below the chart is a coastal profile entitled “A View of the Land from the Old Head of Kinsale to Hawks Rock, the Old Head W b S 7 Miles. Cork Harbour mark’d *. ″

Original, hand-coloured copper engraving on extra thick paper / Better paper – edition [differing from all other versions of this map we ever handled, this is only the second version of this high-quality version of this Map we encountered], possibly an admiralty issue since it was dedicated to the Office of the Lord High Admiral of Great Britain. London, Sold by W. & I. Mount, T. & T. Page on Tower Hill, [c. 1759]. Beautifully mounted and framed. Size of the actual map: c. 62 cm wide x 52 cm high. Spectacular, unusually excellent condition of this rare, hand-coloured seachart of Cork Harbour with the Old Head and clear geography of Little Island, Poor Head, Ringaskiddy, Cork’s Natural Harbour, Crosshaven, Haulbowline, Spike Island, Cloyne, etc. / Price includes worldwide free shipping per UPS Courier !

The inset Map “A Continuation of Corke Harbour from a smaller Scale” shows the region in greater detail. This inset Map even shows details of Cork City with Ballintemple and its Spring Garden, Blackrock, Glancalain, Doundaniel, Douglas, Ronan’s Court, Mariebureagh [Maryborough], Red Island, Little Island, Horsehead with a longer Message on the Map about the location south of Horsehead reading: “Passage where great ships ride; Its good Ground and very convenient for Building of Ships”, Further East on the Inset-Map we can see Carickhowell Castle, Midleton with a message on the map: “lately Built and made a Port Town by Sir John Brodrick” also showing “Part of Sir John Brodricks Park”, Ballyourdock, Ballnacor, Road to Youghal / To the south of the Inset-Map we see Ashgrove and a larger Message / “Note” for Sailors and Navigators to “Be careful to avoid having Roches Tower & Dog’s Nose in one; for without the Tower, in that line, there is a small Rock, which will take you up at 23 feet water, with 7 fathom round it. The Figures [on this Map] shew the depth in feet at low Water”.

FRom a Blog on the UCC – Website: “We first know of the Rev. John Lindsay as chaplain in the Royal Navy in 1755 and by 1757 he was chaplain on H.M.S. Fougueux (64 guns, 500 men). The chart of Cork is based on a survey started in 1757 when H.M.S. Fougueux was in Cork for a period. Lindsay had noticed that the old charts were “laid down by the antient rule of thumb and even in that way itself finished in a very bungling manner” (Voyage 13). When H.M.S. Fougueux returned to Cork as part of an expedition to French West Africa in 1758 Lindsay completed the chart. The chart was first published in “A Voyage to the Coast of Africa in 1758” (1759). (Source: UCC – Blog) 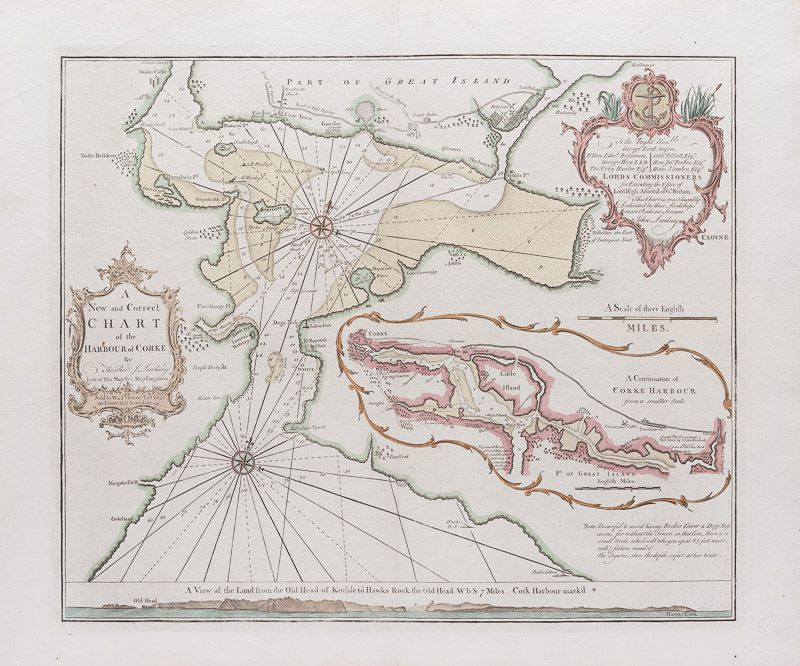 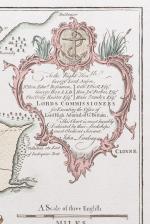 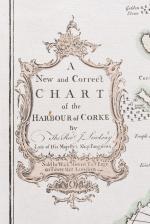