Published in the Illustrated Atlas, And Modern History Of The World Geographical, Political, Commercial & Statistical, Edited By R. Montgomery Martin.
Beautifully bordered and fascinating map of the western hemisphere, including North and South America. The Azores and Cape Verde islands and the Caribbean islands are included in the Atlantic Ocean. In the south South Shetland Islands and South Victoria populate a blank area where the Antarctic ought to be found. In the Pacific, New Zealand and the Polynesian and Sandwich (Hawaiian) islands. To the north the end of Asia can be seen and, across the Arctic Ocean, Greenland is also included. The political divisions are colourfully delineated. Interestingly, Alaska is described as ‘Russian America’ highlighting that the U.S. had still to purchase “Seward’s Icebox” from the Tsar when the map was published.

The project of ‘The Illustrated Atlas’ was designed to be finished just in time for the anxiously awaited “Great Exhibition of the Works of Industry of All Nations” or The Great Exhibition, sometimes referred to as the Crystal Palace Exhibition in reference to the temporary structure in which it was held, was an international exhibition that took place in Hyde Park, London, from 1 May to 11 October 1851. It was the first in a series of World’s Fairs, exhibitions of culture and industry that became popular in the 19th century, and it was a much-anticipated event. 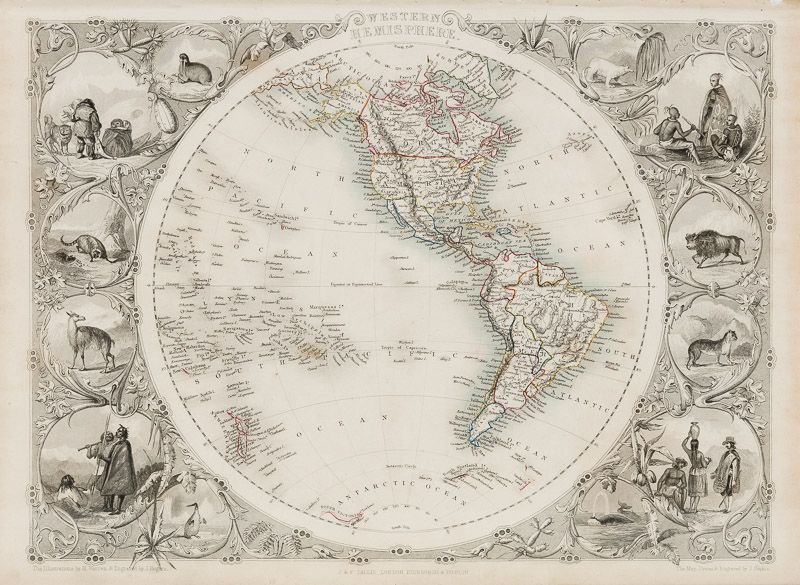