Jacob Merritt Howard (July 10, 1805 – April 2, 1871) was a U.S. Representative and U.S. Senator from the state of Michigan during and after the American Civil War.
He was born in Shaftsbury, Vermont and attended the district schools and the academies of Bennington and Brattleboro. He graduated from Williams College in Massachusetts in 1830 and then studied law. He moved to Detroit, Michigan in 1832 and was admitted to the bar in 1833 and commenced practice in Detroit. He was city attorney of Detroit in 1834 and a member of the Michigan State House of Representatives in 1838.
He was elected as a Whig to the United States House of Representatives for the Twenty-seventh Congress, serving March 4, 1841–March 3, 1843. He was not a candidate for renomination in 1842. He helped draw up the platform of the first Republican Party convention held in Jackson, Michigan in 1854. He was Michigan Attorney General from 1855-1861.
Howard was elected as a Republican to the United States Senate in 1861 to fill the vacancy caused by the death of Kinsley S. Bingham. He was reelected in 1865 and in total served from January 1862, to March 1871. He was chairman of the Committee on Pacific Railroads in the Thirty-eighth through Forty-first Congresses.
As a Senator, Howard is credited with working closely with Abraham Lincoln in drafting and passing the Thirteenth Amendment to the United States Constitution, which abolished slavery.
During Reconstruction Howard participated in debate over the first clause of the Fourteenth Amendment to the United States Constitution, arguing for including the phrase and subject to the jurisdiction thereof specifically because he wanted to make clear that the simple accident of birth in the United States was not sufficient to justify citizenship. Howard said:
[The 14th amendment] will not, of course, include persons born in the United States who are foreigners, aliens, who belong to the families of ambassadors or foreign ministers accredited to the government of the United States, but will include every other class of person. Howard died in Detroit and is interred in Elmwood Cemetery. 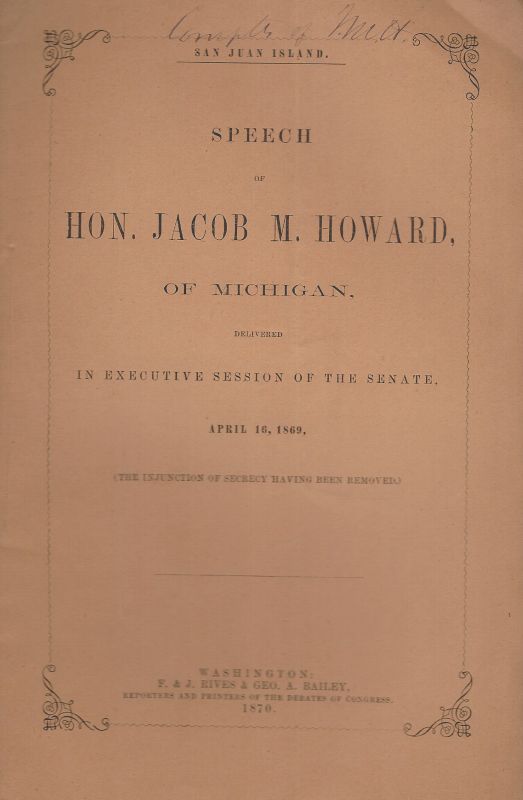