Derham, Astro-Theology: or, a Demonstration of the Being and Attributes of God,

Astro-Theology: or, a Demonstration of the Being and Attributes of God, From a Survey of the Heavens [Including a Chapter on the “Attraction of Gravity”].

Sixth Edition. London, W. Innys, 1731. Octavo. [16], LVI, [8], 246 pages,[10 pages of Index], [with 3 astronomical foldout engravings by english Cartographer and Explorer John Senex / The Engravings show the Ptolemaic Geocentric System with the Earth as centre of the Universe and discuss other models as well by pointing to pages within the text that reflect on the illustrations / Two of the Engravings are showing the Stars and Constellations over Europe, the Mediterranean, Asia Minor, Asia etc.]. ]. Original Hardcover / bound in contemporary panelled calf. The book has been sympathetically rebacked to style. Besides a spot of hard green adhesive to the front board in very good condition. The armorial 18th century bookplate of one Dr. Blackett appears on the first pastedown [″A coat of arms divided into three portions, with three stars and three scallop shells throughout. At the helm is the head of an eagle, and elaborate mantling, flowers, and leaves surround the crest. Below is the motto ‘Nous Travailler ons dans L’Esperance’”] / The text of this rare and notoriously underrated book is complete and clean with the three foldout engravings of the cosmos to the rear with only a small archival paper restoration to one of the engravings.

Derham discusses on page 55 and 56 the Comet Halley, reflecting without mentioning it on Edmond Halley’s Publication from 1705 “Synopsis of the Astronomy of Comets” and reflecting on William Whiston (by mentioning him): “According to Mr. Whiston’s Determinations, the First of these three Comets will again appear in the year 1758, the Second in 1789 and the Third and last not till about the year 2255”

Includes for example the following chapters:

Of the Copernican System (this chapter also mentions Rheticus [which is Georg Joachim de Porris], Moestlinus [which is Michael Maestlin, German Astronomer and Mathematician known for being the mentor of Johannes Kepler (Wikipedia), Kepler [Johannes Kepler], Rothman [which is Christoph Rothmann – mathematician and one of the few well-known astronomers of his time. His research contributed substantially to the fact that Kassel became a European center of the astronomy in the 16th century (Wikipedia), Bullialdus [which is french Astronomer Ismaël Boulliau or Ismaël Bullialdus], Lansberge [which is Dutch Astronomer Johan Philip Lansberge], Hergonius [which is French mathematician and astronomer Herigone or Pierre Herigonius], Schickard [which is Wilhelm Schickard, German Professor of Hebrew and Astronomy] , Gaffendus [which is Pierre Gassendi, French philosopher, Catholic priest, Astronomer and Mathematician] , Galileo [Galileo Galilei])

Of the Sun’s Recess / Objections from Sense answered / Objections from Philosophy answered / Of the New System / Fixt Stars are Suns / The Author’s Opinion about the Whiteness of the Galaxy / The Author suspects there are more New Stars than ever yet have been taken notice of / His Observations of them / The Planets are Worlds / Mr. Huygens denies Sees being in the Moon / The Author’s Proof and Observations of them / What Creatures inhabit the Planets //

William Derham FRS (26 November 1657 – 5 April 1735) was an English clergyman, natural theologian and natural philosopher. He produced the earliest, reasonably accurate estimate of the speed of sound.

William Derham was the son of Thomas Derham. He was born at Stoulton, in Worcestershire, England. He was educated at Blockley, Gloucestershire and at Trinity College, Oxford from 1675 to 1679. He was ordained on 29 May 1681. In 1682, he became vicar of Wargrave, Berkshire and from 1689 to 1735 he was Rector at Upminster, Essex. While at Upminster, in 1716 he became a Canon of Windsor and the vestry minutes show that thereafter he divided his time between those two places. The parish registers of Upminster record his burial at St. Laurence’s in 1735. However, the precise site of his grave is unknown and, in accordance with his wishes, there is no memorial to him in the church.

In 1696, he published his Artificial Clockmaker, which went through several editions. The best known of his subsequent works are Physico-Theology, published in 1713; Astro-Theology, 1714; and Christo-Theology, 1730. All three of these books are teleological arguments for the being and attributes of God, and were used by William Paley nearly a century later. However, these books also include quantities of original scientific observations. For example, Physico-Theology contains his recognition of natural variation within species and that he knew that Didelphis virginialis (the Virginia opossum) was the only marsupial in North America. Similarly, Astro-Theology includes several newly identified nebulae (this was the name used at the time for all extended astronomical objects: some of his nebulae are what we would now call star clusters). His 16-feet long telescope (also used when measuring the velocity of sound) was at the top of the tower of St Laurence’s Church, where the necessary doors are still in place. On 3 February 1703, Derham was elected Fellow of the Royal Society. He was Boyle lecturer in 1711–1712. His last known work, entitled A Defence of the Church’s Right in Leasehold Estates, appeared as early as 1731.
But besides the works published in his own name, Derham contributed a variety of papers to the Transactions of the Royal Society. He revised the Miscellanea Curiosa. He edited the correspondence and wrote a biography of John Ray, whose ‘physico-theology’ (natural theology) tradition he continued, making him an early parson-naturalist.
He edited Eleazar Albin’s Natural History, and published some of the manuscripts of the scientist Robert Hooke. His meteorological observations at Upminster (in the Transactions of the Royal Society) are amongst the earliest series in England. (Wikipedia)

John Senex (1678 in Ludlow, Shropshire – 1740 in London) was an English cartographer, engraver and explorer.

He was also an astrologer, geologist, and geographer to Queen Anne of Great Britain, editor and seller of antique maps and most importantly creator of the pocket-size map of the world. He owned a business on Fleet Street in London, where he sold maps.

He was one of the principal cartographers of the 18th century. He started his apprenticeship with Robert Clavell, at the Stationers Company, in 1692. Senex is famous for his maps of the world, some of which have added elevations, and which feature minuscule detailed engravings. Many of these maps can be found in museum collections; rarely, copies are available for private sale. Some copies are held in the National Maritime Museum; many of his maps are now in the possession of Trinity College Dublin. Having worked and collaborated with Charles Price, Senex created a series of engravings for the London Almanacs, and in 1714 he published together with Maxwell an English Atlas. In 1719 he published a miniature edition of Britannia by John Ogilby. He became particularly interested in depicting California as an island instead of part of mainland North America, a trait which makes many of his maps appealing to collectors. In 1721 he published a new general atlas. He used the work of cartographer Guillaume de L’Isle as an influence. In the 1720s he produced a series of celestial charts in conjunction with Edmond Halley, using Halley’s pirated edition of John Flamsteed’s star catalogue. In 1728 Senex was elected into the Fellowship of the Royal Society of London. (Wikipedia) 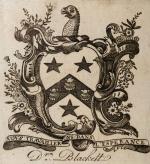