Cologne (Köln) / Leyden (Lyon), Johann Gymnicus (Gymnich) / Johannes and Franciscus Frellon, 1534 / 1537. Octavo. Collation complete: I. Euricius Cordus – Botanologicon: Title with the woodcut device of Cologne-printer Johann Gymnicus, including his Motto, the first line of a Verse from the Aeneid by Virgil ‘Discite Iustitiam Moniti’, 183, [21] pp., 2 blank leaves. The titlepage of the Botanologicon bears the manuscript ownership-entry of Nuremberg’s Astronomer, Philosopher and Mathematician Hieronymus Schreiber [also called Jerôme Schreiber], student-friend of Euricius Cordus’ son Valerius Cordus in Wittenberg and later trustee of Valerius Cordus’ scholarly estate after Valerius Cordus’ premature death in Rome. Dated in the same hand on the titlepage also the entry ‘Anno 1539’, when Valerius Cordus matriculated at Wittenberg and Schreiber already had studied there since May 1532. With several contemporary manuscript annotations throughout both titles (the Botanologicon and Examen) / II. A. M. Brasavola – Examen omnium simplicium medicamentorum: Title, [1], [‘Reverendissimo to Ioannes Argenterius’, 4 pp.], [‘Ad Illustris & Sereniss. (‘Epistola Nuncupatoria’) to the Duces of Ferrara’ 17 pp.], [Epigramma, 1 p.], [Examen & Aristotelis Problemata 542 pages, [Dedication to Franciscus Frellaeus, 2 pp.], [Index copiosissimus in Examen Omnium, 13 pp.], [1]. With several manuscript annotations. Original, contemporary blind-stamped pigskin over wooden boards with some stronger signs of running to the corners, with partially bevelled edges and both of the original metal clasps intact. Very good condition with only minor signs of external wear. Title in ink to upper spine and also to top of fore-edge. Very few pressed plants loosely inserted. Interior in excellent condition with some minor staining to very few pages only.

The Hieronymus Schreiber provenance is a stunning discovery. A more detailed in-depth-publication regarding this item is necessary and already in preparation and will follow at the beginning of 2021, with a plethora of comparative sources; taken into account historical and recent publications.

Hieronymus Schreiber is a cipher, yet still so much is already known about him that amazes. He is not only most famous for being the recipient of one of the first editions of Nicolaus Copernicus’ – De Revolutionibus, fresh from the printing press by Johannes Petreius. But furthermore, a manuscript annotation in Schreiber’s copy of Copernicus masterpiece was later discovered by Kepler to clarify the Preface of Copernicus’ work had been hijacked by Andreas Osiander.

Manuscript annotations throughout the Botanologicon reference the genus Cuscuta in Brasavola’s Examen. This is an important discovery because it supports Hieronymus Schreiber’s ownership / Schreiber suffered knowingly from chronic liver-problems and famously, prior to the fateful trip to Italy with Valerius Cordus, he went to Aachen to cure and seek relief from this very issue. Cuscuta was not only in TCM, but also generally, known during the Renaissance as remedy for liver-issues.
Schreiber’s time in Aachen is recorded in correspondence between Philip Melanchthon and Hieronymus Schreiber [see Corpus Reformatorum] and correspondence between Philip Melanchthon and Joachim Camerarius even proves Hieronymus Schreiber living with Melanchthon in Wittenberg, where a regular study-group would certainly have included Valerius Cordus [letter mentioned in Corpus Reformatorum – Volume V].

Some of the Annotations in the Examen reference the Botanologicon; especially on page 502 of the Examen in which Brasavola denies previous knowledge of the Botanologicon when writing his work. Edward Lee Greene (and Frank N. Egerton, ed.) already found page 502 of Brasavola’s Examen important enough to illustrate the undeniable connection of ‘Botanologicon’ and ‘Examen’ by including a full translation from latin of the long passage of Brasavola’s denial (see Volume II, p.696/697 of ‘Landmarks of Botanical History’).

Even though many modern scholarly criticism identifies and recognizes the Botanologicon of Euricius Cordus as the ‘first attempt at the scientific systematization of plants’ (D.S.B. III, pp. 412-13), and Lynn Thorndike devotes an entire chapter on Brasavola and his pharmaceutical writings, the most significant and informed hypothesis on the reciprocal influence between Euricius Cordus’ Botanologicon and Brasavola’s Examen is the lengthy essay of Edward Lee Greene’s chapter on Pharmacology in his ‘Landmarks of Botanical History’ (Volume II, p.690-701).
What makes Lee’s essay so different, is his theory of the genesis of both works, his speculation on the possible plagiarization by Brasavola and the immediate absolution he grants Brasavola due to Brasavola being in danger of dying a heretic if he would have openly admitted and endorsed the work of Euricius Cordus, an open supporter of the Reformation.

It is highly likely that Schreiber has received the work from his new friend Valerius Cordus. It is important to understand that medicinal plants (Simples / Medicamenta Simplicia) were the main interest in Valerius Cordus’ studies (see p.292 of Ersch and Gruber’s 1829 published ‘Encyclopedia of Science and Art’). This would explain the two volumes being bound together since Brasavola’s Examen is the first monumental publication on simples, and Valerius Cordus probably knew that his father Euricius Cordus and Antonio Musa Brasavola shared the same teacher in Ferrara, italian humanist and physician Niccolò Leoniceno.
While (after we consulted a specialist in paleography), it is more likely that an undecipherable note on the titlepage of the ‘Botanologicon’ (below Schreiber’s name) reads as an abbreviation of “at Wittenberg”: ‘a Wbrg anno 1539’, it might as well read as ‘a Valery’ [from Valerius]. The manuscript notes identify annotations from someone connecting the dots between both works. But while it must not be doubted that this is Hieronymus Schreiber’s personal copy of two of the most important botanical works ever printed, beyond the speculation this Volume could have also been a gift from Valerius Cordus, it is their scholarly friendship, manifested in many historical references (see below), contemporary and modern secondary literature, which is transcending the speculation and elevates the value of this copy.

Their friendship was deeply rooted in their time in Wittenberg, a place where reformatory thought culminated in progressive publication, discourse and lively activity, a place of reformation of scientific thought where Valerius Cordus was not only student but also scholar and successfully lectured on Dioscorides to a phrenetic crowd (see Ersch and Gruber, p. 291). The friendship between Valerius Cordus and Hieronymus Schreiber might as well have started earlier than 1539 when Valerius Cordus was already matriculated in nearby Leipzig (since 1533) and Schreiber, who matriculated in Wittenberg already in 1532.
Valerius Cordus continued his studies at the University of Leipzig and also worked in the Apothecary of his uncle Johannes Ralla and we can be sure their likely earlier friendship accelerated in Wittenberg, where Schreiber was a very successful student under Melanchthon and Valerius Cordus was in the tradition of his father traversing the countryside with students and friends for days in search of plants and their identification.
The friendship between Hieronymus Schreiber and Valerius Cordus is again mentioned when Valerius Cordus and Hieronymus Schreiber travel to Nuremberg, where Cordus is introduced to the influential apothecary Georg Oellinger and alderman Hieronymus Baumgärtner. Cordus sells his manuscript of the Historia stirpium to these authorities and continues to Italy where he later will meet again with his friend Hieronymus Schreiber. Their friendhsip ends only in Cordus’ death in 1544 during a now famous and fateful excursion in the footsteps of Pliny.
It might indeed feel strange to stray from a description of the Botanologicon, written by Euricius Cordus, and focus so very much on the provenance, Hieronymus Schreiber and Valerius Cordus.
But one must not forget that besides the Botanologicon and Euricius Cordus’ many other important publications, the education of his son Valerius, a well respected, beloved and much bemoaned loss to his contemporary botanist friends, was the most accomplished work of Euricius Cordus. It is known through Hieronymus Schreiber’s well documented possession of Nicolaus Copernicus’ – De Revolutionibus Orbium Coelestium, that he owned one landmark of early science. The here available Volume of Euricius Cordus’ ‘Botanologicon’ and Brasavola’s ‘Examen omnium simplicium medicamentorum’ is not surprising but rather fitting and it deserves the attention and desire to be possessed by an important private or public library. 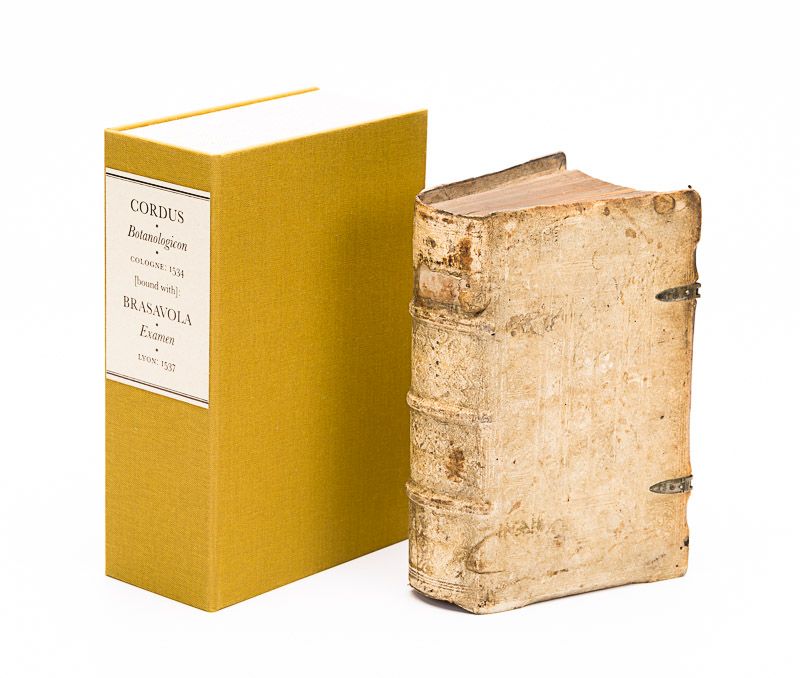 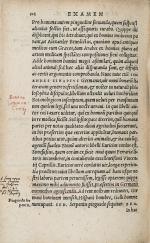 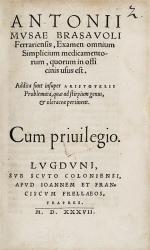 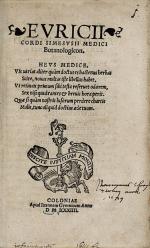 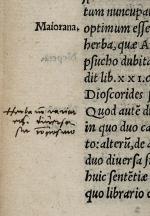 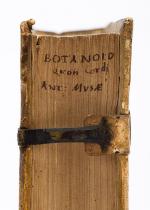 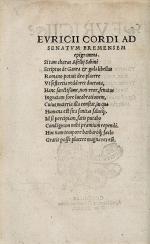 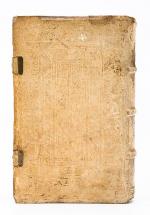 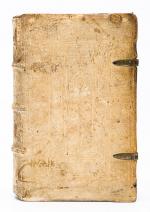