Staunton, An Authentic Account of an Embassy from the King of Great Britain to t

An Authentic Account of an Embassy from the King of Great Britain to the Emperor of China [First Dublin Edition with 34 full-page-plates]; Including Cursory Observations Made, and Information Obtained, in Travelling Through That Ancient Empire, and a Small Part of Chinese Tartary. Together with a Relation of the Voyage undertaken on the Occasion by his Majesty’s Ship ‘The Lion’, and the Ship ‘Hindestan’ in the East India Company’s Service, to the Yellow Sea, and Gulf of Pekin [sic]; as well as of their return to Europe. With Notices of the several places where they stopped in their way out and home: being the Islands of Madeira, Teneriffe and St.Jago, the Port of Rio de Janeiro in South America; the Islands of St.Helena, Tristan da Cunha and Amsterdam, the Coast of Java and Sumatra, the Nanka Isles, Pulo-Condore and Cochin-China. Taken chiefly from the Papers of his Excellency, the Earl of Macartney, Knight of the Bath, his Majesty’s Embassador Extraordinary and Plenipotentiary to the Emperor of China; Sir Erasmus Gower, Commander of the Expedition and other Gentlemen in the several Departments of the Embassy.

Two Volumes (complete set). Dublin, Printed for P.Wogan, R.Cross, P.Byrne and others, 1798. Octavo. Volume I: XV, 449 pages with 8 full-page plates / Volume II: XVIII, 430 pages, with 26 full-page-plates and including an Appendix. Hardcover / Original, early 19th century half leather with original spinelabels. Bindings firm and strong but rather worn. Bookplate of Richard Meade, Ballymartle, to the pastedown of Volume I. Overall in very good condition with some stronger signs of wear but with all the illustrations / engravings, called for in the Dublin Edition.

This fantastic and detailed description of the late 18th century-expedition to China, recorded by irish botanist, Sir George Leonard Staunton, from Galway, also includes for example: A list of Plants collected in the Journey between Peking and Zhe-hol in Tartary / List of Plants collected in the Provinces of Shan-tung and Kiang-nan / Bamboo plants described / Mulberry Trees and their culture / Nankeen cotton and their natural colour / Tallow trees / Of Ranks and Families in China / Intelligence of Sir Erasmus Gower / Culture of Rice / Chinese method of raising crops of vegetables upon the water and on marshy grounds / General descriptions of Chinese towns / Principal mode of travelling in China / Surgical operations less dangerous in China than in the north of Europe / etc. etc.

Appendix I: Table of the Population and Extent of China Proper, within the Great Wall. Taken in round numbers from the Statements of Chow-ta-Zhin / Appendix II: Account of Revenue into the Imperial Treasury at Pekin [sic][Peking], from the different Provinces of China proper / Appendix III: A List of the Chief Civil Officers in China, distinguishing their Number, Station and Salaries (The Tson-too / The Foyen / The Hou-poo / The An-za-tze, or president of the criminal tribunal / The Tao-quen etc.) / Appendix IV: A List of the chief Military Officers of China, their Number, Rank and Salaries including “A rough Calculation of the Military Establishment of China” / Appendix V: Trade of the English and other Europeans to and from China (History of English Exports from and to China) / Appendix VI: Account of Tea exported from China to Europe in Foreign and English Ships, the former from the Diaries transmitted to England by the English Supercargoes, the latter from the Invoices of Ships arrived safe / Appendix VII: [A large, folded Table, showing] An Account of the Quantities of Tea exported from China, in English and Foreign Ships in each year from 1776 to 1795 – showing Swedish, Danish, Dutch, French, Hungarian, Portuguese / American and Prussian ships and the numbers are including English private trade] / Appendix VIII: Shows an Account of the Amount of Goods and Bullion exported by the East India Company to China, in each year from 1775 to 1795 / Appendix IX: An Account of the number of ships with the number of tons, as well as Builder’s measurements of said ships, which arrived from China in 1776 and the following years / Appendix X: An Account of the Quantities of Teas sold by the East India Company since the Commutation Act commenced, including private trade…also an Account of the King’s Duty on Tea sold between the 1st of September,1784 and the 1st of March, 1797. /

Sir George Leonard Staunton, 1st Baronet (10 April 1737 – 14 January 1801) was an employee of the East India Company and a botanist. He was born in Cargins, Co Galway, Ireland and educated at the Jesuit College, Toulouse, France (obtaining an MD in 1758) and the School of Medicine in Montpellier, France. He was awarded a DCL by Oxford University in 1790.

He initially practised as a physician in the West Indies but switched to law and was made Attorney-General in Grenada in 1779. In 1784, he accompanied his lifelong friend George, Lord Macartney, whom he first met in the West Indies, to Madras to negotiate peace with Tipu Sultan, for which service Staunton was created a baronet of Ireland, of Cargins in the County of Galway on 31 October 1785. Staunton was elected in February 1787 a Fellow of the Royal Society.

In 1793, Staunton was named Secretary to the British mission to the Chinese Imperial court. This diplomatic and trade mission would be headed by Lord Macartney. Although the Macartney Embassy returned to London without obtaining any concession from China, the mission could have been termed a success because it brought back detailed observations. Staunton was charged with producing the official account of the expedition after their return. It was published 1797 under the title An Authentic Account of an Embassy from the King of Great Britain to the Emperor of China.
This multi-volume work was taken chiefly from the papers of Lord Macartney and from the papers of Sir Erasmus Gower, who was Commander of the expedition. Sir Joseph Banks, the President of the Royal Society, was responsible for selecting and arranging engraving of the illustrations in this official record.
Staunton died at his London house, 17 Devonshire Street, on 14 January 1801 and was buried in Westminster Abbey, where a monument by Sir Francis Chantrey is erected to his memory. The baronetcy, his Irish estate at Clydagh, County Galway and his London home were all inherited by his only son, George Thomas Staunton. (Wikipedia) 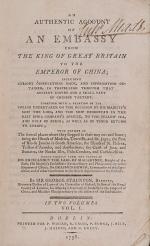 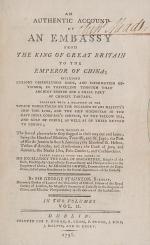 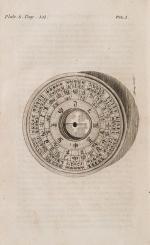 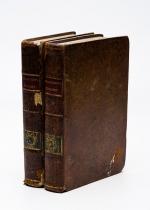 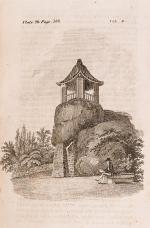 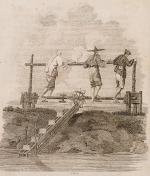 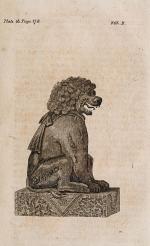 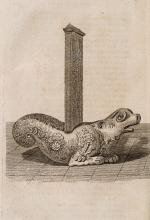 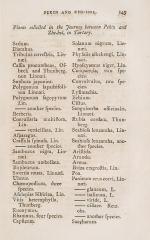 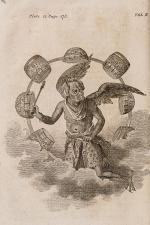