First Edition. London, Printed for W.Mears, F.Clay and D.Browne, without Temple-Bar, 1702-1726. 9 cm x 16 cm. Frontispiece, [3], 342 pages. Hardcover / Modern half-leather with gilt lettering on spine and paper-covered boards. Restored and recently bound to contemporary, early 18th-century-style by an english masterbinder. Very good condition with only minor signs of external wear. The Frontispiece restored and draped to modern paper. Interior clean and in excellent condition. Extremely scarce publication from the library of Daniel Conner (Connerville / Manch House), even though there is no sign of it like a bookplate etc. 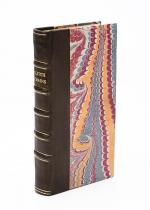