[Foster, A Report of Some Proceedings on the Commission of Oyer and Terminer and

A Report of Some Proceedings on the Commission of Oyer and Terminer and Goal Delivery for the Trial of the Rebels in the Year 1746 in the County of Surry, and of other Crown Cases. To which are added Discourses upon a Few Branches of the Crown Law.

First Dublin Edition. Dublin, Printed for Sarah Cotter, in Skinner-Row, 1763. Octavo. XI, 412 pages plus 16 pages of Index and “Table of the Principal Matters”. Original Hardcover / Full 18th century calf with new spine-label. The binding firm and in excellent condition. Important: Several strong puncture – wounds to the first 54 and last 60 pages (without loss of text). Some occasional staining but text overall clean. A very rare Sarah Cotter print from 18th century Dublin. Although no sign of it, the book came from the library of Daniel Conner (Connerville / Manch House).

Sarah Cotter (fl. 1751–1792) was an Irish printer and bookseller. Sarah Cotter was possibly the sister or daughter of the bookseller Joseph Cotter, who died around 1751. She took over his business, operating under Dick’s Coffee House, Skinner Row, Dublin since 1744 and under her auspices until 1774. Cotter is one of the few women to be admitted into the guild of St Luke the Evangelist as a quarter-brother in 1756, which was usually denied to women as they were not permitted full freedom. She paid quarterage to the guild until 1770. Cotter noticed there was a market for a publisher specialising in legal works, engaging in this work with other printers as she did with Oliver Nelson and Richard Watts (fl. 1745–1762) in the publication of Sir John Strange’s Reports of adjudged cases in the courts of Chancery (1756). She established herself as a law publisher and bookseller, issuing a Sale catalogue of law books for 1766, and advertised regularly with newspapers including the Dublin Journal and Freeman’s Journal. She fostered links with the book trade in London, importing books and appearing as the Dublin agent on London imprints. Other publications by Cotter included Poems by eminent ladies (1757), Shakespeare’s Measure for measure (1761), Philosophical enquiry (4th ed. 1766) by Edmund Burke, and A collection of apothegms and maxims for the good conduct of life by Gorges Edmond Howard (1767).

Cotter married Joseph Stringer (fl. 1754–1783) in 1768. He was a Dublin painter-stainer. Cotter continued to trade under her married name, printing The wonder! or a woman keeps a secret a play by Susanna Centlivre the same year. Her husband and former apprentice Charles Ingham (fl. 1747–1792) managed the business from 1768, with Cotter officially retiring in 1774. Cotter wrote to Philip Skelton on 21 September 1784 from Summerhill, Dublin, praising his book ‘An appeal to commonsense on the subject of Christianity’. To promote his ideas, she offered and paid for a cheaper edition to be printed to allow for a wider circulation. Later, he gave her permission to have his portrait drawn, on the provision that no copies would be made and Cotter would destroy it before her death. She did so three months before her death in 1792, with her will proved at the Dublin prerogative court the same year. Cotter’s books are included in the 1916 “A catalogue of the Bradshaw collection of Irish books in the University of Cambridge 1602–1882”. (Wikipedia)

Sir Michael Foster (1689–1763) was an English judge. Foster was the son of Michael Foster, an attorney, and was born at Marlborough, Wiltshire, on 16 December 1689. After attending the free school of his native town, he matriculated at Exeter College, Oxford, 7 May 1705. He does not appear to have taken any degree. He was admitted a student of the Middle Temple on 23 May 1707, and was called to the bar in May 1713. Meeting with little success in London, he retired to Marlborough, whence he afterwards removed to Bristol, where as a local counsel he gained a great reputation. In August 1735 he was chosen recorder of Bristol, and in Easter term 1736 became a Serjeant-at-law. He held the post of recorder for many years, and upon his resignation in 1764 was succeeded by Daines Barrington. During Foster’s tenure of office several important cases came before him. In the case of Captain Samuel Goodere who was tried for the murder of his brother, Sir John Dineley Goodere, 2nd Baronet, in 1741, the right of the city of Bristol to try capital offences committed within its jurisdiction was fully established.
When Alexander Broadfoot was indicted for the murder of Cornelius Calahan, a sailor in the king’s service, who boarded the merchantman to which Broadfoot belonged, and was killed in an attempt to press the prisoner for the Navy, Foster delivered an elaborate judgment in support of the legality of impressment, being convinced that “the right of impressing mariners for the publick service is a prerogative inherent in the crown, grounded upon common law, and recognised by many acts of parliament”. He, however, directed the jury to find Broadfoot guilty of manslaughter only, as Calahan had acted without legal warrant.
Upon the recommendation of Lord Chancellor Hardwicke, Foster was appointed a puisne judge of the King’s Bench in succession to Sir William Chapple (c.1676-1745) of Upwey. He was knighted on 21 April, and took his seat in court for the first time on 1 May 1745. During the eighteen years he sat in the king’s bench he maintained a high character for his learning as well as for his integrity and independence of judgment.

Many years later, Lord Chief Justice De Grey declared that Foster might “be truly called the Magna Charta of liberty of persons as well as fortunes”, while Sir William Blackstone pronounced him to be a very great master of the crown law. Thurlow, in a letter dated 11 April 1758, alluded in high terms to Foster’s independent conduct in the trial of an indictment for a nuisance in obstructing a common footway through Richmond Park, of which Princess Amelia was then the ranger, and Churchill in his Rosciad sums up Foster’s character in one word:

“Each judge was true and steady to his trust, As Mansfield wise, and as old Foster just”.

Foster died on 7 November 1763, in the seventy-fourth year of his age, and was buried in the parish church of Stanton Drew in Somersetshire, where a monument was erected to his memory. In 1725 he married Martha, the eldest daughter of James Lyde of Stantonwick, Somersetshire. She died on 15 May 1758. There were no children of the marriage. An engraving by James Basire, from an original picture of Foster, then in the possession of Mrs. Dodson, forms the frontispiece to his Life.

He was the author of the following works: 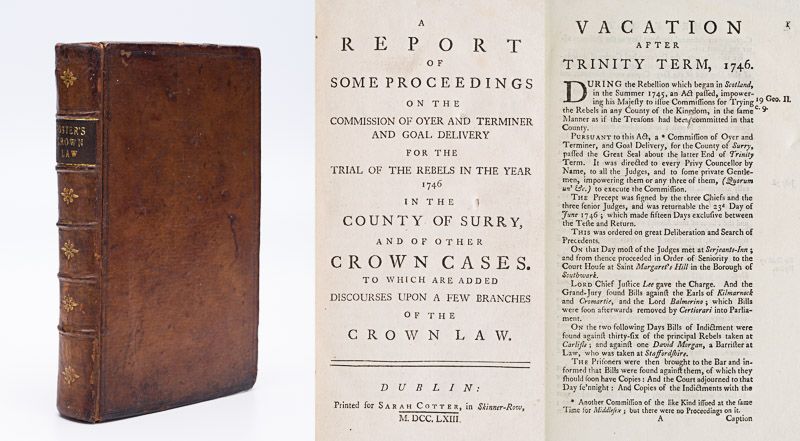 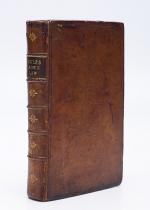