[Wilson, The 'Post Chaise Companion': Or 'Travellers Directory through Ireland'.

The ‘Post Chaise Companion’: Or ‘Travellers Directory through Ireland’. Containing a New & Accurate Description of the Direct and Principal Cross Roads, with particulars of the Noblemen & Gentlemen’s Seats, Cities, Towns, Parks, Natural Curiosities, Antiquities, Castles, Ruins, Manufactures, Loughs, Glens, Harbours, &c. &c. Forming an Historical & Descriptive Account of the Kingdom. To Which is Added, ‘A Travelling Dictionary’, or Alphabetical Tables, Shewing the Distances of all the Principal Cities, Boroughs, Market & Sea Port Towns in Ireland from Each Other. [With remarks on the Ballymartle Estate and Ballintobber / [Ballintubber] – Estate on page 351: “Five miles and a half from Cork, on the Road is Mount-Pleasant, the seat of Mr. Bonwell; and two miles farther, on the L. Ballymartle, that of the Rev. Mr. Mead” / “Within two Miles of Kinsale, on the Road is Ballintobber, the fine seat of John Mead, Esq.”].

The 4th Edition, corrected and enlarged. With an entire New Set of Plates. Dublin, Printed & Published by J.Fleming, no year [c.1813-1815]. Octavo (14 cm x 22 cm). Frontispiece, XXXVI, 660 (double-columns, not pages: Nearly all pages are divided in double-columns and only from the ‘Circuits of the Judges’ does the book switch to single page-pagination, ending with [false] page 660 plus 19 unnumbered pages of Index). With the large fold-out: “Map of the Roads of Ireland including all the Post-Towns” (36 cm x 48 cm) and all the plates in place (see full list below and high – resolution – images on our website). Hardcover / Original, early 19th – century half leather with new spinelabel. The rare,best and enlarged, 4th edition in a contemporary 19th-century binding. Upper hinge slightly damaged. Interior very good with some minor foxing. Overall a rare and excellent publication.

With amazingly detailed descriptions of local historical places, small dwellings, local Seats of Esquires and Grand Houses.
We give here an example of descriptions of locations all over Ireland by mentioning details of areas in West Cork like: Bandon, Clonakilty (Cloghnikilty), Ross (Cahirmore, the Seat of Mr.Hungerford) / “A little beyond Ross is Derry, the seat of Mr. Townsend and near it Castle-Sally, that of Mr.Morres” / “Within three miles of Castletownsend are the Ruins of a Castle, on the Road is Braad, the Seat of Mr. Jervis and about half a mile from it is Braanlaghan, the seat of Mr.O’Donovan” / “At Castle-Townsend, is the seat of Richard Townsend, Esq. most beautifully situated at Glandore Harbour” / “Skibbereen is a small market town where the collector, surveyor and other officers of the Port of Baltimore reside. On the West Side of the River is a new erected Church and in the town a decent market-house. The river Hen runs through the place, over which there is a stone bridge, but so low, as to be sometimes overflown with floods. The clothing trade is followed in this place……(with much more about Skibbereen) / “Baltimore was anciently called ‘Dunashad’ – i has an excellent harbour. It was formerly a place of some consequence, but on the 20th June, 1631, being taken and plundered by Algerines, the terror spread thereby subsisted so long and deterred people so much from settling there, that it has never since recovered. It is now a poor decayed fishing town with not a good house in it, the officers belonging to the Port residing at Skibbereen. ( mentions also Cape Clear) //

Includes the following illustrations in form of original maps and copper engravings:

2. “Wilson’s Modern Pocket Travelling ‘Map of the Roads of Ireland’ including all the Post-Towns” (36 cm x 48 cm)
Inscribed by Permission to his Excellency John Jefferies, Earl of Camden, Viscount Bayham, &c., Lord Lieutenant General, and General Governor of Ireland” – With a beautiful Cartouche, showing Hibernia with the Harp and Historical Howth Lighthouse and Fishermen as well as a Legend with List of all the “Counties with References to Villages or Stages (of Carriages), Great or Direct Roads, Cross Roads, Post Towns, Canals, County Boundaries” [Irish and English Miles showing]

4. “A Plan of the Lakes of Killarney, Co. of Kerry” (21.6 cm x 17.5 cm)
A Map in Bird’s Eye View-Style, showing Killarney itself with the Bog, Cloghreen, Mucross House and all the surrounding hills. 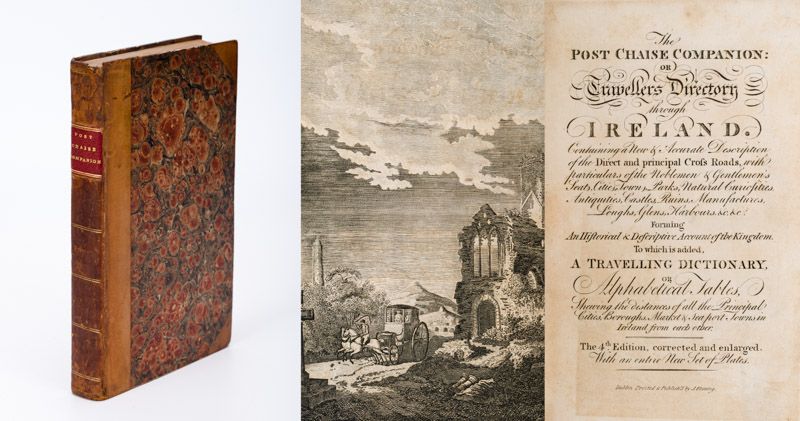 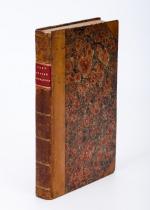 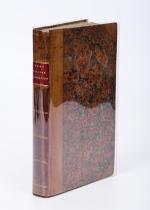 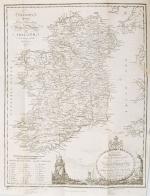 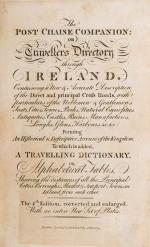