Moore, A Journal During a Residence in France, From the Beginning of August, To

A Journal During a Residence in France, From the Beginning of August, To the Middle of December, 1792. To Which is Added an Account of the Most Remarkable Events That Happened at Paris from That Time to the Death of the Late King of France. [Including the Hand-coloured Map].

First Irish Edition. Two Volumes (complete set). Dublin, Printed for P.Byrne, J.Moore, B.Dugdale, W.Jones, Colbert and J.Rice, 1793. Small-Octavo (11.5 cm x 17.5 cm). 303, 570 pages plus a Hand-coloured “Map of General Dumourier’s Campaign on the Meuse” (showing the area between Metz and Reims as well as Sedan and Nancy). Hardcover / Modern half-leather bound to the style of the 18th-century with spinelabels. Both Volumes in protective Mylar and now housed in a bespoke Solander Box. Bookplate / Exlibris of Richard Meade of Ballymartle attached to pastedown of Volume I. Excellent condition !

John Moore FRSE (1729 – 1802) was a Scottish physician and travel author. He also edited the works of Tobias Smollett.He was born on 10 October 1729 in Stirling, the son of Rev Charles Moore of Rowallan (d,1735) and his wife, Marion Anderson. The family moved to Glasgow in his youth and he was educated at Glasgow Grammar School. He was then apprenticed to Dr. John Gordon in Glasgow 1745 to 1747.

After taking a medical degree at Glasgow, he served as a Surgeon’s Mate with the army in Flanders during the Seven Years’ War, then proceeded to London to continue his studies, and eventually to Paris, where became surgeon to the household of the British ambassador there. In 1751 he returned to Glasgow to rejoin Dr. John Gordon (also then practising with Dr. Thomas Hamilton). From 1769 to 1778 he accompanied the Duke of Hamilton (who was linked to Thomas) on a Grand Tour of Europe. On his return he took up residence in London.
In 1792 he accompanied Lord Lauderdale to Paris, and witnessed some of the principal scenes of the Revolution. His Journal during a Residence in France (1793) is the careful record of an eye-witness, and is frequently referred to by Thomas Carlyle.
In 1784 he was elected a Fellow of the Royal Society of Edinburgh. His proposers were Andrew Dalzell, James Gregory, and John Robison. He died in Richmond in Surrey (now part of London) on 21 February 1802. He is buried in Stirling.

His novel Zeluco (1789), a close analysis of the motives of a selfish profligate, produced a great impression at the time, and indirectly, through the poetry of Byron, has left an abiding mark on literature. Byron said that he intended Childe Harold to be a poetical Zeluco, and the most striking features of the portrait were undoubtedly taken from that character. Moore’s other works have a less marked individuality, but his sketches of society and manners in France, Germany, Switzerland, Italy and England (A View of Society and Manners in France, Switzerland and Germany, London, W. Strahan & T. Cadell, in the Strand, 1779, 2 vol.; A View of Society and Manners in Italy, with anecdotes related to some eminent characters, London, W. Strahan & T. Cadell, 1781, 2 vol.) were also very popular during his lifetime and furnish valuable materials for the social historian. “Mordaunt. Character Sketches of Life, Characters, and Manners, in Various Countries; including the Memoirs of A French Lady of Quality” was a powerfully written anti-French Revolution novel in three volumes in the form of 34 character sketches of famous politicians, royalty, generals, the wealthy, and the celebrity of the day. It also offers detailed eyewitness accounts of John Moore’s observations as he travelled throughout Europe in the last years of the 18th century. There are gripping accounts of the heroic feats of a dashing British Officer included, which were actually accounts of John Moore’s son, General Moore. (Wikipedia) 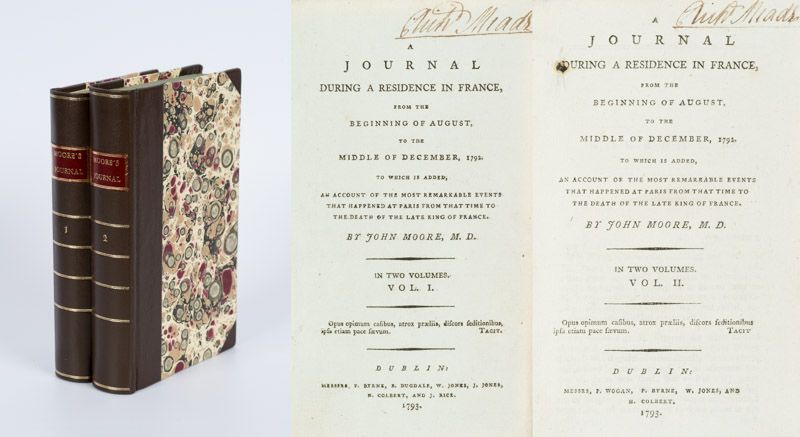 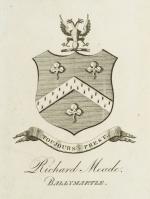 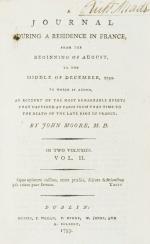 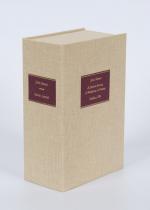 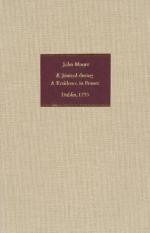