Lovecraft, Collection of thirteen (13) works on and by H.P.Lovecraft. The collec

San Francisco and others, Night Shade Books and other Publishers, 1984 – 2008. Octavo. More than 4000 pages. Original Hardcovers with dustjacket as well as original Softcover-Volumes. Excellent condition with some minor signs of wear only. Excellent collection for the Lovecraft-Afficionado as well as being a good starting-Kit for Fantasy Lovers. The collection comes with international free shipping per Courier.

Howard Phillips Lovecraft (August 20, 1890 – March 15, 1937) was an American writer of weird, science, fantasy, and horror fiction. Lovecraft is best known for his creation of a body of work that became known as the Cthulhu Mythos.

Born in Providence, Rhode Island, Lovecraft spent most of his life in New England. After his father was institutionalized for general paresis in 1893, he lived affluently, but his family’s wealth dissipated soon after the death of his grandfather. After this point, he was living with his mother in reduced financial conditions, until she was institutionalized in 1919. He became involved in the United Amateur Press Association and wrote essays for them. In 1913, he wrote a critical letter to a pulp magazine that ultimately led to his involvement in pulp fiction. He became active in the speculative fiction community and was published in several pulp magazines. Lovecraft moved to New York when he married Sonia Greene in 1924. He then joined the small “Kalem Club”, and would later become the center of a wider body of authors known as the “Lovecraft Circle”. They introduced him to Weird Tales, which would become his most prominent publisher. Despite this, his time in New York took a toll on his mental state, which coincided with increased financial pressures. Finding social and financial conditions there intolerable, he returned to Providence in 1926. After returning to Providence, he became increasingly active in his literary output, producing some of his most prominent works, including “The Call of Cthulhu”, At the Mountains of Madness, The Shadow over Innsmouth, and The Shadow Out of Time. He would remain active as a writer until his death from intestinal cancer at the age of 46.

Lovecraft’s literary corpus is based around the idea of Cosmicism, which was simultaneously his personal philosophy and the main theme of his fiction. According to this philosophy, humanity was an unimportant part of an uncaring cosmos that could be swept away at any moment. To support this point, his stories included fantastic and science fiction elements that represented the perceived fragility of anthropocentrism. Having an interest in scientific discoveries, he incorporated then-current scientific discoveries into his stories. These stories generally take place in a fictionalized version of New England. Civilizational decline also plays a major role in his works, as he believed that the West was in decline during his lifetime. While Lovecraft came to this conclusion independently, he was influenced by Oswald Spengler’s articulation of it. More generally, these stories and elements were influenced by his readings of Edgar Allan Poe and Lord Dunsany’s fictional works and writings.

Throughout his adult life, Lovecraft was never able to support himself from earnings as an author and editor. He was virtually unknown during his lifetime and was almost exclusively published in pulp magazines before his death, but is now regarded as one of the most significant 20th-century authors of supernatural horror fiction. This is the result of a literary and scholarly revival that began in the 1970s and 1980s. This resulted in an increased number of critical and scholarly discussions of Lovecraft’s life and works. Simultaneously, a wide body of adaptations and works that are based on or influenced by his writings emerged. These works form the basis of the Cthulhu Mythos, which draws on Lovecraft’s characters, setting, and themes. (Wikipedia) 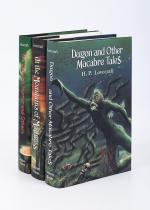