Great Tranquillity: Questions and Answers. Translated from the Hebrew by Glenda Abramson and Tudor Parfitt.

Yehuda Amichai (May 3, 1924 – September 22, 2000) was an Israeli poet. Amichai is considered by many, both in Israel and internationally, as Israel’s greatest modern poet. He was also one of the first to write in colloquial Hebrew.
Yehuda Amichai (Ludwig Pfeuffer) was born in Würzburg, Germany, to an Orthodox Jewish family, and was raised speaking both Hebrew and German.

Amichai immigrated with his family at the age of 11 to Petah Tikva in Mandate Palestine in 1935, moving to Jerusalem in 1936. He attended Ma’aleh, a religious high school in Jerusalem. He was a member of the Palmach, the strike force of the Haganah, the defense force of the Jewish community in Mandate Palestine. As a young man he volunteered and fought in World War II as a member of the British Army Jewish Brigade, and in the Negev on the southern front in the Israeli War of Independence.

After discharge from the British Army in 1946, Amichai was a student at David Yellin Teachers College in Jerusalem and became a teacher in Haifa. After the War of Independence, Amichai studied Bible and Hebrew literature at the Hebrew University of Jerusalem. Encouraged by one of his professors at Hebrew University, he published his first book of poetry, Now and in Other Days, in 1955. In 1956, Amichai served in the Sinai War, and in 1973 he served in the Yom Kippur War. Amichai published his first novel, Not of This Time, Not of This Place, in 1963. It was about a young German Jew in Israel after World War II, trying to make sense of the world that created the Holocaust. His second novel, Mi Yitneni Malon, about an Israeli poet living in New York, was published in 1971 while Amichai was a visiting professor at the University of California, Berkeley. He was a poet in residence at New York University in 1987. For many years he taught literature in an Israeli seminar for teachers, and at the Hebrew University to students from abroad.

Amichai was married twice. First to Tamar Horn, with whom he had one son, and then to Chana Sokolov; they had one son and one daughter. His two sons were Ron and David, and his daughter was Emmanuella.
He died of cancer in 2000, at age 76.

Amichai’s poetry deals with issues of day-to-day life, and with philosophical issues of the meaning of life and death. His work is characterized by gentle irony and original, often surprising imagery. Like many secular Israeli poets, he struggles with religious faith. His poems are full of references to God and the religious experience. He was described as a philosopher-poet in search of a post-theological humanism. Amichai has been credited with a “rare ability for transforming the personal, even private, love situation, with all its joys and agonies, into everybody’s experience, making his own time and place general.″

Some of his imagery was accused of being sacrilegious. In his poem “And this is Your Glory” (Vehi Tehilatekha), for example, God is sprawled under the globe like a mechanic under a car, futilely trying to repair it. In the poem “Gods Change, Prayers Stay the Same” (Elim Mithalfim, ha-Tfillot Nisharot la-Ad), God is a portrayed as a tour guide or magician. (Wikipedia) 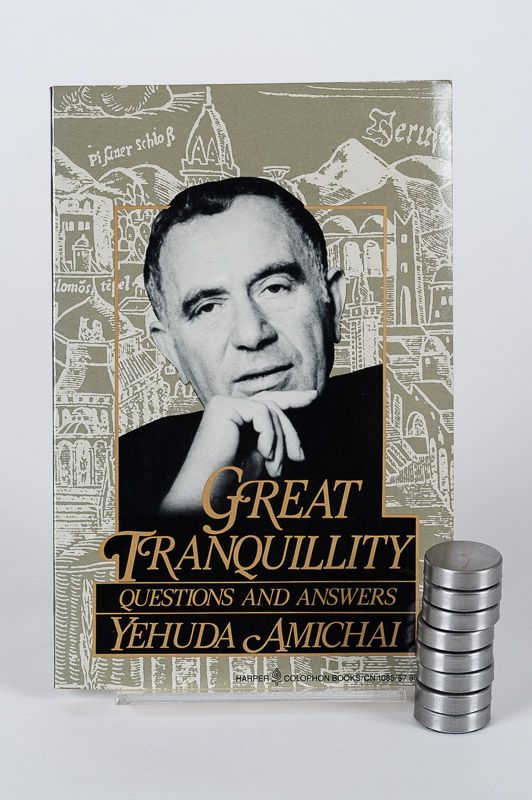