First Edition. London, Vista Books, 1963. 11,2 cm x 18,9 cm. 48 pages. Original softcover with dustjacket in protective Mylar. Very good condition with only minor signs of external wear. Inscribed and signed by Dannie Abse to american writer Peter Viereck: “To Peter – A poor exchange for the books you have been kind enough to give me, and which I so value – Dannie – Amherst, April ‘68”. [The Pocket Poets].

Daniel Abse, (22 September 1923 – 28 September 2014) was a Welsh poet.
Abse was born in Cardiff, Wales, to a Jewish family. He was the younger brother of politician and reformer Leo Abse and the eminent psychoanalyst, Wilfred Abse. Unusually for a middle-class Jewish boy, Dannie Abse attended St Illtyd’s College, a working-class Catholic school in Splott. Abse studied medicine, first at the University of Wales College of Medicine, and then at Westminster Hospital Medical School and King’s College London.
Although best known as a poet, Abse worked in the medical field, and was a physician in a chest clinic for over thirty years. He received numerous literary awards and fellowships for his writing. In 1989, he received an honorary doctorate from the University of Wales.

His first volume of poetry, After Every Green Thing, was published in 1949. His autobiographic work, Ash on a Young Man’s Sleeve, was published in 1954. He won the Welsh Arts Council Award in both 1971 and 1987, and the Cholmondeley Award in 1985. He was a Fellow of The Royal Society of Literature from 1983. In a foreword to Collected Poems 1948–1976, Abse noted that his poems are increasingly “rooted in actual experience,” both domestic and professional, and many display a reconciliation between Jewish and Welsh themes and traditions. (Wikipedia) 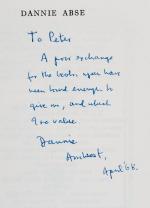 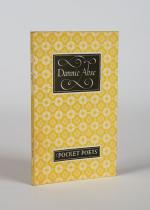