Butterworths: History of a Publishing House.

Founded in 1818, Butterworths was acquired from the owner’s estate for 5500 pounds in 1895 and was then built into England’s premier law publisher by Stanley Bond, who owned and ran the company for 45 years. This history tells the story of Bond and his associates and also of the events after his death in 1943, culminating in the second acquisition of Butterworths, under pressure of a takeover bid by Robert Maxwell, by the International Publishing Corporation, in 1967. The personalities and power struggles surrounding this venerable publishing house enliven the story and cast revealing sidelights on the worlds both of British publishing and English legal practice. The author, H. Kay Jones, joined Butterworths in 1934 and retired in 1974. From 1946, he was the publishing manager and from 1967 he was the company’s Deputy Managing Director. [From dustjacket notes] 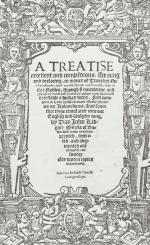 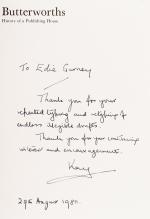 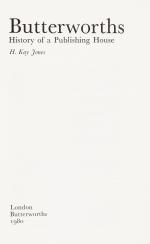 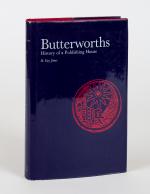