Buddenbrooks. [First American Edition in stunning condition with an amazing, signed Letter by Thomas Mann, thanking an admirer for reflecting on reading his masterpiece “Buddenbrooks”. Signed on 21st of June 1940, on personalized stationery of Thomas Mann from Princeton, New Jersey, Mann wrote: “Thank you for writing to me and for telling me that you liked ‘Buddenbrooks’ when you read it recently at Colby College. It gave me pleasure, too, to know that you heard my daughter Erika lecture and had ‘thoroughly enjoyed’ yourself. With all good wishes, yours sincerely. Thomas Mann” ]. Translated from the German by H. T. Lowe-Porter.

The Black Swan. Translated from the German by Williard R. Trask. 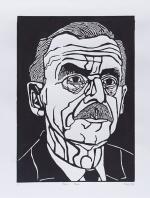