Hawker, Instructions to Young Sportsmen in all that relates to Guns and Shooting

Instructions to Young Sportsmen in all that relates to Guns and Shooting.

Fifth Edition, corrected and improved with explanatory plates and woodcuts. London, Longman, Rees, Orme, Brown and Green, 1826. 15 cm x 21.5 cm. XXI, 456 pages with X plates and several woodcuts within the text. Original Hardcover (half leather on four raised bands with marbled paper-covered boards) with gilt lettering on spine. Very Good condition with some external signs of wear. Minor abrasion to one corner only. All plates and illustrations included as called for. One plate cleanly detached. Binding very firm and strong. Some spotting and occasional staining inside.

[Ray Riling Bibliography “Guns and Shooting” – No. 373 – In his important publication Riling mentions: “Considered a classic on the subject and was written “at particular request of some sporting friends of the author, who had recourse to the press in order to present each of them with a legible copy….”]

GUNS: London Barrel-makers (For their addrsses see under the head of “Duck uns)
Damascus Barrels, Elevation, Sight, Ramrod, Directions for trying Barrels , Stock, Recipe for polishing Gunstocks, Alphabetical List of the names of the principal parts of a Gun, Directions for cleaning Guns and precautions against their hanging fire /

Detonating System: Trials of Flint Locksagainst Detonators, Nippel or Pivot, Breeching, Venthole, Side Nail etc.
Gun Cases / Powder / Shot / New Patent Shot / Flints / Wadding / Powder Flask / Shot belt / Dress of a Shooter / Apparatus / Shooting: Finishing Lessons (with a disclosure to the unfinished shooter, of how to manoeuvre wild covies, and to know how to cope with a crafty old Sportsman) /

Partridge Shooting (With recipe for keeping Grouse; so as to send them any distance, within the United Kingdoms in the hottest weather) /
Shooting Pheasants (with a few directions to the unexperienced for recovering their own Game if undhandsomely drivenfrom them, Shooting in Covert) /
Cock shooting / Snipe shooting, with observations that Snipe Shooting and Fly Fishing may be followed on the same day / Letter with informaion to Mr.Martin on these two subjects after which are introduced new directions for Fly Fishing, Trolling, and other matter relative to Trout Fishing / A List of Birds &c. which are most commonly followed by Shooting Sportsmen; alphabetically arranged with their proper names as selected by Bewick; their Latin and French names as given by Linnaeus and Buffon, with general directions for getting access to them /
Black Game shooting on the Borders of Hants and Dorset / Directions as to what birds are proper for the Table; how to choose them at Market; how to keep them / Recipe for Sauce to Wildfowl /
Dogs (concise directions for breaking and managing) / Newfoundland Dogs – how to choose them
Diseases in Dogs (Distemper: Letter and Experiment on Vaccination for this Disease) / Mange / Sore Feet / Thorns / Poison / Bites of Vipers / Bite of a Mad Dog /
Preservation of Game – exposing various tricks of Poachers and Trespassers / Duck Guns wuth Adresses of London Barrel – makers /
To make an old Gun shoot well / Launching and Canoe shooting etc. etc. etc.

I. Commencement of a Cripple-chase, after firing 2 lbs. of Shot into a Skein of Brent-geese and two Wild Swans (with Boats, Dogs, wounded Curlew, dead Coot, &c.)
II. Sections of the different Gun Breechings
III. Check Collar and Puzzle for breaking Pointers or Setters
IV. Hampshire Coast “Gunning-Punt”, Mud Boards, Apparatus
V. Mud-Launchers on the Oozes, off Lymington, shoving their punts up to Wigeon
VI. PooleCanoe (with directions for building it), Mud-Boards
VII. Approaching Wildfowl (with Canoe and Stanchion Gun) preparative to the flowing Tide
VIII. Wildfowl Artillery or Carriage for using a Stanchion-Gun on Land
IX. Hut Shooting on the French System (The principal birds here shown are fastened to the strings, the Decoy Ducks and Mallards; In the killed and wounded, the pintail, the Cock Wigeon, a Duck and Mallard and the Tufted Duck; and, flying up from the water, the Dunbird and the Scaup Drake
X. Carriage (with Directions ) to convey a Shooting Canoe (or Punt) over Land 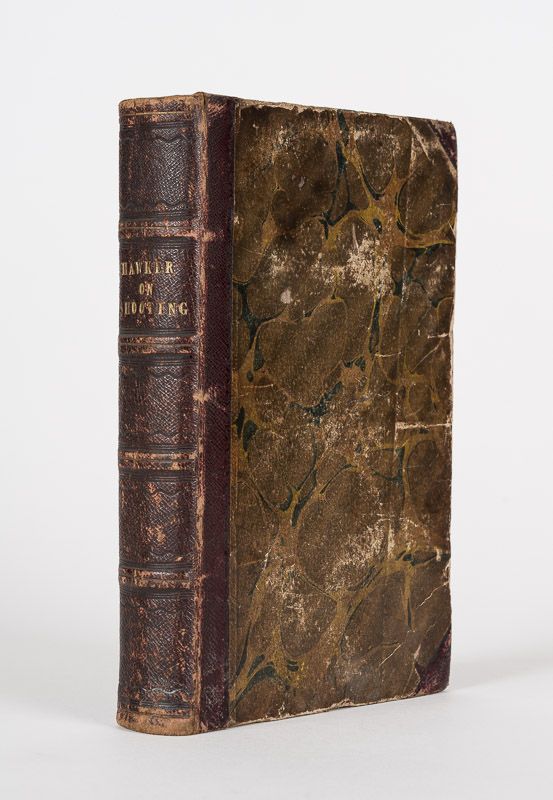 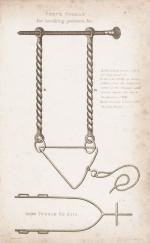