Enter your name and e-mail address to receive our regular catalogues: 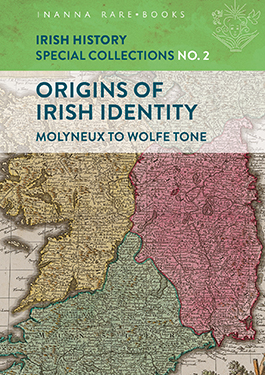 A Blend of fantastic historical publications, some with exciting provenance, mainly from the 18th and 19th century – Library of Richard Meade (Ballymartle) and the remarkable Library of Daniel Conner (Manch House) , cousin of United Irishman Arthur O’Connor. The Catalogue covers the period of the so-called Long 18th-century, which we define from the 1641-Rebellion [Éirí Amach 1641] to the Death of Theobald Wolfe Tone in 1798 but also includes the period of repercussions after Wolfe Tone’s Death, all the way to the end of the Irish Potato-Famine in 1852. Most of the books from the Meade-Library and Conner-Library have been extensively restored over the past two years by master-binderies in England and Germany and four more catalogues with many landmark-publications of 18th and 19th century-Literature and History from these collections will follow in the next three months. These catalogues will include several classics of irish and english literature, many of them printed by 18th and 19th-century printers in Cork and Dublin [Please Subscribe to our E-catalogues and Newsletter]

Rare Book Catalogues with a variety of Topics