Civilization & Capitalism [in the] 15th – 18th Century. Collection of all three Volumes: Volume I: The Structures of Everyday Life – The Limits of the Possible / Volume II: The Wheels of Commerce / Volume III: The Perspective of the World.

The State Letters of Henry, Earl of Clarendon – Lord Lieutenant of Ireland During the Reign of K. James the Second: and His Lordship’s Diary for the Years 1687,1688, 1689 and 1690. From the Originals in the Possession of Richard Powney, Esq. with an Appendix from Archbishop Sancroft’s Manuscript in the Bodleian Library.

Oxford / Dublin, The Clarendon Press / Elizabeth Watts in Skinner-Row, 1765. Octavo. Volume I: XXXII, 407 pages [including a list of subscribers which also mentions Richard Meade, Esq. [Richard Mead] / Volume II: 480 pages plus 20 unnumbered pages of a thorough Index. Original Hardcover / 18th century full calf with gilt lettering on spinne. Both Volumes in protective collector’s mylar. From the library of Richard Meade (Ballymartle), with his Exlibris / Bookplate to pastedown of Volume One and the name of John Meade to the titlepage of Volume II. Faded dampstain only to the endpapers of Volume I / Minor wormhole-damage to the endpaper and titlepage of Volume II. Otherwise in very good and firm condition. A very rare and significant publication.

Three Volumes in One. [London], [A. Islip], Printed for the Societie of Stationers [Neufme Part et Dixme Part] / Printed by the Assignes of John More, Esquire [Unzme Part], 1613 / 1629 / 1631. Quarto (19.5 cm x 27.5 cm). Collation complete: La Neufme Part: [34], 286, [1 unnumbered] pages / La Dixme Part: [54], 291 pages / La Unzme Part: [10], 100 pages. Original 17th century full leather on five raised bands with modern spinelabel and new endpapers. Very good condition with only minor signs of external wear. Minor damage to upper spine and a very minor sign of a faded dampstain to small region of the upper bookblock. Interior beautiful and clean with all three titlepages intact. Extremely beautiful condition of this early set of three Volumes of Coke’s Reports. This is the french edition of Coke’s Reports with all three prefaces in English and Latin, the main text is in ‘Law-French’ and Latin. Contemporary manuscript-signature/entry of the preowner, one “Lionel Holle”.

First and only edition in this form. Ulmae [Ulm], Daniel Bartholomaei et Filium, 1744. Small Quarto (19 cm x 22 cm). [XX], 226 pages plus the two rare copper engravings, depicting male and female Druids of old (Druides et Druidissae). The two plates with engravings were bound in the rear. Hardcover / Excellent, recent half-leather binding in protective Mylar. Very good condition with only minor signs of wear. The half-leather slightly stained but all in wonderful condition. The original bookblock uncut. A very rare and interesting publication on Druidism / Text in latin with some german elements.

[Second Edition]. Oxoniae [Oxford], Excudebat H.Hall Academiae Typographus, Impensis Richardi Davis, 1657. Duodecimo (9 cm x 15 cm). [4], 174 pages with three further titlepages after page33 (″Aede Christi”), after page 135 (″Epistolae Nonnullae”), after page 151 (″Alumnorum Versiculi”) and after page 161 (″Lector Candide Coronidis”). Hardcover / Modern half-leather with gilt lettering and spinelable. Bound to style of the 17th century by an english masterbindery, which made sure to preserve the original endpapers and pastedowns. An excellent restoration with preserved patina of this scarce work. The titlepage with a professional repair. Although no sign of it, this book came from the library of Daniel Conner (Manch House). Name of another former owner to pastedown: “Thomas Davis – his book , October 21, 1790”. Extremely rare ! 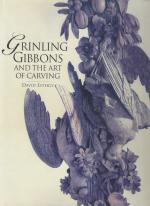 Grinling Gibbons and the Art of Carving.

A Display of Heraldry. By John Guillim, pursuivant at Arms. The Sixth Edition [on fine paper]. Improv’d with large Additions of many hundred Coats of Arms, under their respective Bearings, with good Authorities from the Ashmolean Library, Sir George Mackenzie, &c. With his Tract of Precedency, containing all his Rules, Observations, Arguments, and chief Instances. To which is added, “A Treatise of Honour Military and Civil”, According to the Laws and Customs of England, By Capt. John Logan. Illustrated With the Arms, Crests, Supporters, and Motto’s of the Royal Familly, and Nobility: The Arms of the Sees of the English Bishops, and several of the Gentry. Together With the proper Habits of the different Degrees of the Nobility of England, and the Emblems of the chief Orders of Knighthood in Europe; all fairly engraven on Copper Plates. Also An Exact List of the Baronets, from their first Creation to this present Time; and most of their Arms Blazon’d. With an Account of the Customs, Government, and Privileges of the City of London, the other Cities of England, and Shire-Towns of each County, and their Arms. Likewise A Supplement of Scarce tracts relating to the Office of Arms, taken from Authentick Copies. And A Dictionary, explaining the several Terms used by Heralds, in English, Latin and French. With proper Tables to the Whole. [With 17 full-page, original portraits, engraved by Edward Le Davis and flemish engraver Michael van der Gucht / With 295 engraved crests / coat of arms, displayed on 47 pages].

London, R. and J. Bonwicke and R. Wilkin in St.Paul’s Church-Yard / And J. Walthoe and Tho. Ward, in the Temple, 1724. Folio (26 cm x 39 cm). Frontispiece, [5], 20 pp. [″The Introduction”], [1], 460 pp. [″A Display of Heraldry”], [2], 275 pp. [″Observations upon the Laws and Customs of Nations”], 58 pp. [″Honour Civil of the City of London”], 24 pp. [″Dictionary used by Heralds”], [11] pp. [″Alphabetical Table of the Names of the Nobility and Gentry”]. Illustrated and complete with 17 portraits of courtyard and apparatus and 47 plates, engraved on wood, reproducing a total of hundreds of coats of arms with coats, crests, lambrequins, helmets and coins. Very many coats of arms in the 2-columned text. Hardcover / Original 18th-century binding with modern restauration (rebacked) to the highest standards. Superior example of this publication ! Unusually excellent condition with only very minor signs of external wear. Frontispiece and last page of the work with minor crease. Two corners torn (two pages following the title), corner of page 185 torn and page 92 of the second part of the book with longer lesion within text (no loss of text). Endpapers and pastedown with some minor spotting. All these descriptions of faults sound worse than they are. Interior text, plates and portraits overall in unbelievably clean and excellent condition. Name of pre-owner in ink on title and verso frontispiece (″J.Stilwell”).

Contemplations Moral and Divine [Bound with “Meditations upon the Lord’s Prayer”].

Amsterdam, Gerardum Mercatorum / J.Hondius, c. 1595-1602. Original handcoloured engraving / Vintage Mercator Map. The Map measures: 55.3 cm wide x 45.3 cm high. Extraordinary, original late 16th or early 17th century Map by Mercator with Irelands south in beautiful hand-coloured outline. Wide margins with two minor lesions to the outer margins (Map itself not affected). A Dream of a Map and the best condition and original colouring of this Map we have ever seen.