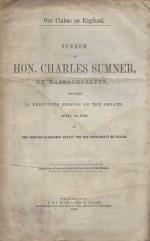 Washington/Boston, Rives & Bailey/Wright & Potter, 1869/1870. 8°. 14, 69 pages. Softcover. Original Pamphlets. The original speech of 1869 waterstained and with some tears and chips (unopened). The later printing with appendix: Original printed wrappers. Very good plus condition with some dogears and a small tear to front cover.

Indian Givers: How the Indians of the Americas Transformed the World. 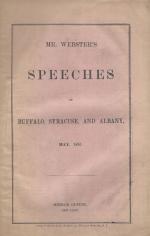 “Negro Violence – The Black and White Picture. A distinguished reporter analyses a gathering storm that civil rights and desegregation alone cannot contain, and that may transform the American way of life beyond recognition”.

Reader’s Digest ARticle, c.1966. Octavo. 6 pages. Extracted, stapled original pages from a Reader’s Digest publication. Very good condition with some minor signs of wear only. Disturbing, very ambivalent article by Theodore White, condensing his thought about the “biological anarchy” of collapsing Negro communities after the uprising and riots of 1964 and 1965; “Teenage Savages” (″Negroes and Puerto Ricans of the late teens and early 20’s. These teenagers are an element that no one knows how to handle. Denied love or dignity or patrimony or tradition or any culture but television, they rock around on the deck of an unstable society, their bread given to them by underpaid welfare workers, their hopes at zero, their mothers despised, their hearth the gutter, a sub-culture in a general American urban culture which itself does not know where it is going”).

The Universal Gazetteer [Very Rare Dublin Edition] : or a Description of the several Empires, Kingdoms, States, Provinces, Countries, Cities, Towns, Seas, Lakes, Rivers, Mountains, Volcanos &c. in the Known World. Together with an Account of The Extent, produce, Revenue, Forces, Trade, Manufacturer, Religions &c. of the several Countries and of the Battles, Sieges and other Transactions that have sendered them remarkable. To which is prefixed a copious Introduction to Geography. The whole calculated to explain the Occurences in Modern History. Illustrated with four large and accurate Maps of Europe, Asia, Africa and America (only the Map of Asia is present: “New & Correct Map of Asia – Drawn from the latest and best Authorities by J. Gibson”). The Second Edition, in which several necessary Corrections and Material Additions have been made; the Geography of Ireland has been revised and enlarged; about four hundred entire new Articles have been added, chiefly relative to North America and Ireland, none of which are contained in the London Impression, and comprising in the whole, many thousand Places more than any other Gazzetteer; Whereby it is rendered the largest, cheapest, and most compleat Work of the Kind extant.

Dublin, Printed for Peter Wilson in Dame-Street, 1759. Small Octavo. XXXVIII, (1), 512 unnumbered pages (collation complete) with only the folded Map on Asia present and the other three maps missing. Including 6 pages of “Books, printed for and sold by Peter Wilson, in Dame-Street”. Original Hardcover (full calf on five raised bands with original spinelabel intact). Half a page in chapter “M” torn out. Faint dampstain throughout. Otherwise in very good condition. Binding rubbed and bumped on the corners but absolutely firm and tight. Minor traces of foxing and staining only. Name of preowner in 17th or 18th century ink on endpaper: “Daniel Eugene MacNamara”. Very rare Dublin Edition of this publication with a full-page recommendation of the famous Lexicographer Benjamin Martin.