Collection of important works by and on Daniel O’Connell Collection of important works by and on Daniel O’Connell, including a portrait and publications which recorded Legal Disputes during his career. [The Collection is still growing, please offer us material, publications, secondary Literature etc.]. 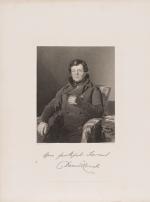 Portrait of Daniel O’Connell seated after a portrait by T. Carrick, engraved by W. Holl. 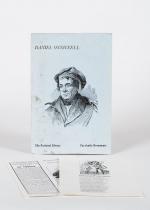 Dublin, Committee for Educational Services Based on the Institutions of Science and Art. 1978. 23.7 cm x 34.8 cm. 22 Facsimile Documents. With many black and white illustrations. Original Folder. Very good+ condition with only minor signs of external wear. Folder is slightly worn. Leaf of folder no longer glued. From the reference library of Hans Christian Andersen-Translator Erik Haugaard.

The Law Recorder: Containing Reports of Cases and Proceedings in the Courts of Law and Equity, &c. &c. &c. at Dublin and elsewhere, from Michaelmas Term, 1827 to Trinity Term, 1828, (both inclusive) with Essays, Communications &c. &c. on Legal Subjects.

Original First Edition. Volume I only. Dublin, Printed for the Proprietor, 1828. Large Quarto. Engraved portrait-frontispiece of Sir Anthony Hart, Knight, Lord High Chancellor of Ireland [with a few caricatural corrections in contemporary ink (see image)], XXIV, 586 pages. Hardcover / Original half leather of the early 19th century with original spinelabel. Slightly dusty and and the binding a little stronger rubbed. Interior still very good with some browning to corners of the bookblock and some occasional foxing. Very rare, original edition with several appearances of Daniel O’Connell as defender and speaker !

A Full and Revised Report of the Three Days’ Discussion in the Corporation of Dublin on the Repeal of the Union, With Dedication to Cornelius Mac Loghlin, Esq., and an Address to the People of Ireland – By Daniel O’Connell, M.P. To which are added, A Valuable Appendix, and the Petition from the Corporation to the Imperial Parliament, for the Restoration of Ireland’s Domestic Legislature. Edited by John Levy, Esq. [Bound with a relevant publication by Daniel O’Connell’s son, John O’Connell (1810 – 1858): “John O’Connell – An Argument for Ireland” – Dublin, 1844. III, 391 pages].

First Edition. Dublin, Published by James Duffy, 1843. Octavo. VIII, 391 pages. Hardcover / Original half leather of the 19th century. This is NOT an ex-library-copy how so often is the case for this book, but an excellent condition First Edition. Very good condition with only minor signs of wear.

Dublin and Cork, The Talbot Press, 1929. Octavo. 124 pages. Original Hardcover with original dustjacket in protective collector’s mylar. The dustjacket shws a small portrait of Daniel O’Connell at a time when he was a candidate for Clare. The jacket with damage. The Volume itself in very good condition with only minor signs of wear. Extremely Rare ! 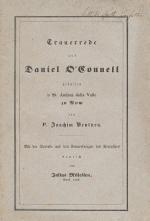 Ireland and Its Rulers since 1829.

Three Volumes (complete set). London, T.C.Newby, 1844 – 1845. Octavo. Volume I (Third Edition, 1845): 294, [2] pages / Volume II (Second Edition, 1844): 223 pages / Volume III (First Edition, 1844): 339 pages. Hardcover / Original publihsher’s cloth with gilt lettering on spine. All three Volumes in protective Mylar. Rare in this uniform publisher’s binding, with all endpapers and pastedown’s intact. Very good condition with only minor signs of wear. From the library of Charles B. Molyneux, with his name to the endpaper of each Volume. Very rare and important publication by the Mallow – born Daniel Owen Madden and an important source on legal disputes between Daniel O’Connell and fellow Lawyers in the Munster Circuit, mentioning Daniel O’Connell’s early Career and personal traits: “He went [to] the Munster Circuit, which, in those days, was thronged by men of great professional ability. But O’Connell ranked first amongst the first….Caution in conducting a case was his most prominent characteristic….He affected to be careless, but a more wary advocate never stood in a Court of Justice. Perhaps no great advocate ever had the same relish for the legal profession. O’Connell hunted down a cause with the gusto of a Kerry Foxhunter in pursuit of Reynard. He keenly enjoyed baffling the Crown Counsel and bullying the witnesses against some trembling culprit in the dock. In those times Counsel for prisoners were not allowed to address the jury, but O’Connell had a great art of putting illegal questions to a witness and in arguing for their legality, made “aside” short interjectional speeches to the jury”.

No.453 of a limited edition of only 1000 published. Naas, Leinster Leader Ltd., no year. Octavo. VII, 208 pages. Original Hardcover with dustjacket. Excellent, close to new condition with only minor signs of wear.