Collection of interesting and rare publications, an early spoken word radio play by Beckett (Embers), a signed poetry book in english (Limited Edition of only 100 copies) as well as a stunning exchange of letters between the irish writer John Montague and irish artist Louis Le Brocquy, in which John Montague refers to Beckett: “The early Beckett is a smart alec; the break comes when he has to survive in post-war France and accept “his own darkness”. [See images and full descriptions of each single item in this Beckett-Collection on our Homepage under “Libraries & Collections” – look for “Samuel Beckett Collection”].

Collection of interesting and rare publications, an early spoken word radio play by Beckett (Embers), a signed poetry book in english (Limited Edition of only 100 copies) as well as a stunning exchange of letters between the irish writer John Montague and irish artist Louis Le Brocquy, in which John Montague refers to Beckett: “The early Beckett is a smart alec; the break comes when he has to survive in post-war France and accept “his own darkness”. The Montague – connection is meaningful. John Montague was Beckett’s neighbour in Paris, became his friend and not only lectured on Beckett but wrote the most significant and revealing obituary upon Beckett’s death in the Guardian: “An Appreciation of Samuel Beckett” (Wednesday, 27th of December 1989) / [See images and full descriptions of each single item in this Beckett-Collection on our Homepage under “Libraries & Collections” – look for “Samuel Beckett Collection”]. 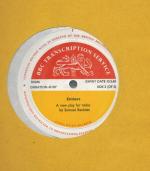 Embers – A New Play for Radio [This is the original BBC Double-LP-Recording in original BBC-wrappers].

First Edition. London, BBC Transcription Service, 1959. 4°. 2 Records with three sides recorded (Side One and Two: “Embers” by Samuel Beckett / Side 3: “Living Radio” – “A Discussion about the 1959 Italia Prize Awards”). In the original, Yellow BBC-Sleeve. Excellent condition with only minor signs of wear to the covers. Very Rare ! 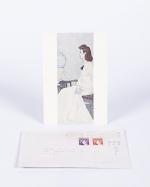 Small Archive of personal correspondence between irish-american writer John Montague and irish artist Louis Le Brocquy plus many related items. The correspondence also includes John Montague touching on Samuel Beckett. The core of the collection includes 1. Extremely insightful and important, very personal manuscript-letter from John Montague to Louis Le Brocquy – Inside an envelope addressed by John Montague to Louis Le Brocquy at his french residence ‘Domaine des Combes’ with Louis Le Brocquy’s answer carefully tucked into the same envelope, treasured by John Montague. The densely filled, very personal 4-page-manuscript letter from John Montague, is dated Christmas 1981, written after “a sabbatical [..] on a long tour which led me as far as Los Angeles” and is a strong reflection of John Montague’s personal struggles, thoughts and influences as a writer; he talks about his ten years of teaching in the US “after O’Riada’s death led to a vacuum” and “enduring the semi-bourgeois limbo of Cork”. Montague speaks about the time “after the harness came off” and he “felt quite strange, and after thirty years my stammer returned in painful, nearly uncontrollable force”. Montague even touches on his fears about his health and continues “I clocked into a clinic for a rest cure….so far liver excellent, so it is not Sean or Brendan all over again (in any case, loving the stuff, as you do, I can’t overdrink; the tastebuds are against it)”. Montague dives into comparisons with Samuel Beckett: “″Did you realize that Sam Beckett was under analysis at the Tavistock Clinic for two years ? – The early Beckett is a smart alec; the break comes when he has to survive in post-war France and accept “his own darkness”. Montague also touches on his struggle with his mother “Isn’t it terrible that we spend up to nearly middle-[a]ge coping with the traumas of youth, with no way round it ? – I have cleared/cleaned/buried & forgiven my mother in my next book “The Dead Kingdom”….” – The letter continues to talk about books, “the Landslide Manuscript”, poetry and his work etc. etc. He mentions a Dupin “play” which “will travel in my Paris luggage”. Montague also touches on the subject of the Irish Troubles and writes “I have always, by the way, believed that 1916 may have been a mistake as Yeats said: “For England may keep faith – For all is said and done” / Montague speaks about “My own area of Tyrone is blessedly free from all but minor incidents” – Amazing document of confidence and trust between two irish landmark personalities. 2. Louis Le Brocquy’s answer to John Montague is dated “New Year’s Day 1981”[which should have been 1982]: A. Very personal manuscript Letter – a direct answer to Montague’s letter from “Christmas 1981” (1 sheet with both pages filled in ink and signed “Louis”) in which Le Brocquy reflects on the tense political situation with Northern Ireland and the overall worldwide tension of a looming war / Le Brocquy writes that he did have a “wild hope that when Charlie took office…that he and Thatcher might between them opted a ‘Rhodesian’ solution in the North” / Le Brocquy also writes about the eagerly awaited publication of “Selected Poems” of John Montague and he also asks John if “you thought of collecting Esteban’s and Dupin’s poems in French with your translations ?” – Le Brocquy offers to help with illustrations etc. – Both letters together in an envelope which suggests that John Montague received his letter to Louis le Brocquy back from the Le Brocquy-estate after Le Brocquy’s death. / Also included: B. A manuscript postcard with Le Brocquy’s “Girl in White” as a postcard-reproduction in which Le Brocquy suggests a project with John Montague and sends greetings to Montague’s wife Evelyn and the kids (in envelope from Carros,France) / C. In his function as chairman of Amnesty International, Le Brocquy sends a callout by Amnesty International to John Montague and kindly asks him to support the cause. He sends the callout to John by adding a few manuscript, personal lines of affection (in envelope from Carros,France).

France / Ireland, Carros / Cork, 1980-1981. A4. 4 pages on two sheets (main Montague-letter), 2 pages on 1 sheet (Le Brocquy – answer), 1 postcard, 1 manuscript-letter from Jacques Dupin to John Montague (25.10.1978) about a translation of “L’Éboulement” (Dupin also speaks about Louis le Brocquy in the letter), several pages of letters (mostly typed and signed) from other figures in irish and international literature and art. Original Envelopes. Very good condition with only minor signs of external wear. Besides some ephemeral materials from personalities in Literature and Art, addressed to John Montague, the small collection includes several vintage photographs of John Montague, taken during his acceptance of a honorary Doctorate of Literature at UCC, Cork, as well as a Legislative Resolution by the State of New York (Senator Daly), recognizing and thanking the distinguished author and poet John Montague with this decree on May 26, 1987. Among the lesser interesting materials is a pamphlet titled “Ireland’s Literary Renaissance – 20th century Portraits” in which portraits by Louis Le Brocquy of John Montague and Thomas Kinsella are included. The pamphlet is accompanied by a letter from James White to John Montague in which he explains this being a publication that was released for an exhibition in Chicago and he apologises for the entries being “necessarily short but hopefully reasonably correct”. Provenance: From the private collection of John Montague’s papers in his recently sold West Cork Home.

Poems in English. [The very rare Limited Edition (one of only 100) – signed by Samuel Beckett].

The Selected Works of Samuel Beckett. With an Introduction by Paul Auster.

The Beckett Suite. A Suite of 24 etchings based on the post-war prose piece “From an Abandoned Work” by Samuel Beckett. With an essay by Patrick McCabe: “Mother-loathing, Ducks and Horses whither than Ide-Cream” – A rumination on the work of Samuel Beckett and Diarmuid Delargy. With an introduction by Catherine Marshall.

Galway, Arts Centre / Taylor Galleries, c.2005. Oblong Quarto. 6 pages text plus 24 pages with illustrations of the suite, a photographic illustration of a Bronze of Beckett, created by Diarmuid Delargy in 2005. Original Softcover. Very good condition with only very minor signs of wear.