Sydney, Angus & Robertson, 1968. 8°. 128 pages. Original Hardcover with dustjacket. Very good + condition with some signs of use to the dustjacket.

David Watt Ian Campbell (16 July 1915 – 29 July 1979) was an Australian poet who wrote over 15 volumes of prose and poetry. He was also a talented rugby union player who represented England in two tests.
Campbell was born on 16 July 1915 at Ellerslie Station, near Adelong, New South Wales. He was the third child of Australian-born parents Alfred Campbell, a grazier and medical practitioner, and his wife Edith Madge, née Watt.

In 1930, Campbell went to The King’s School, Parramatta, and in 1935, with the support of the headmaster, he enrolled at Jesus College, Cambridge, graduating with a Bachelor of Arts in 1937. His studies in English literature developed his interest in poetry. At Cambridge, he excelled at rugby union and as well as earning a Blue after playing in The Varsity Match, he was chosen for England. Playing at flanker he made his debut in the test match against Wales at Twickenham in 1937. He played a second test that year against Ireland.

Campbell returned to Australia from Cambridge in 1938 and on 6 November 1939 joined the Royal Australian Air Force. He had learned to fly while at Cambridge and went to train as a pilot at Point Cook. He served in New Guinea, where he was injured and awarded the Distinguished Flying Cross, and flew bombing missions from Darwin in the Northern Territory.

Campbell married Bonnie Edith Lawrence on 20 January 1940 at St John’s Anglican Church, Toorak, Melbourne. They had two sons (including John) and a daughter, but were divorced in 1973. In 1946, he settled on a family property, Wells Station, near Canberra, and in 1961 he moved to Palerang, near Bungendore, New South Wales. In 1968, he moved again to The Run, Queanbeyan, New South Wales.

On 18 February 1974 Campbell married Judith Anne Jones in Sydney. From May to September 1975 they travelled in England and Europe, his first trip abroad since his Cambridge days.

He had many literary friends. These included, in addition to poet and editor, Douglas Stewart, historian Manning Clark, poet Rosemary Dobson, writer Patrick White, and poet and academic A. D. Hope. He was interested in painting, golf and polo, and was a keen fisherman, an activity he often shared with Douglas Stewart. Manning Clark has written about aspects of his friendship with David Campbell. Campbell, wrote Clark “was an enlarger of life, not a straitener or measurer, or a life-denier” the key to him being found in “the two books he re-read each year: The Idiot by Dostoevsky, and The Aunt’s Story by Patrick White. “He was the war hero, the victor in the boxing ring, the strong man in the rugby scrum, the fisherman, the horseman, the polo player who knew all about Myshkin [character from The Idiot] and Theodora Goodman [character from The Aunt’s Story]. I saw him knock out a man in the bar at Delegate for casting doubts on his manhood. The next morning I saw him cast a fly with such delicacy that it landed on the waters of the Snowy River with the grace of a butterfly.” David Campbell died of cancer on 29 July 1979, at the Royal Canberra Hospital.
While Campbell had a few poems published in Cambridge journals between 1935 and 1937, his poetry didn’t start appearing regularly in print until 1942 when he started sending poems to The Bulletin. Six were published by 1944. It was in these years that he first became known to Douglas Stewart, with whom he formed a long-standing friendship. These early poems dealt primarily with war, but from 1946, after his move to Wells Station, “his poetry became more closely attuned to the realities of the countryside”. Kramer writes that “his daily life as a grazier, his acute observations of the natural world and his deep understanding of European poetry gave him a distinctive poetic voice, learned but not didactic, harmonious but not bland, vigorous but finely tuned”. (Wikipedia) 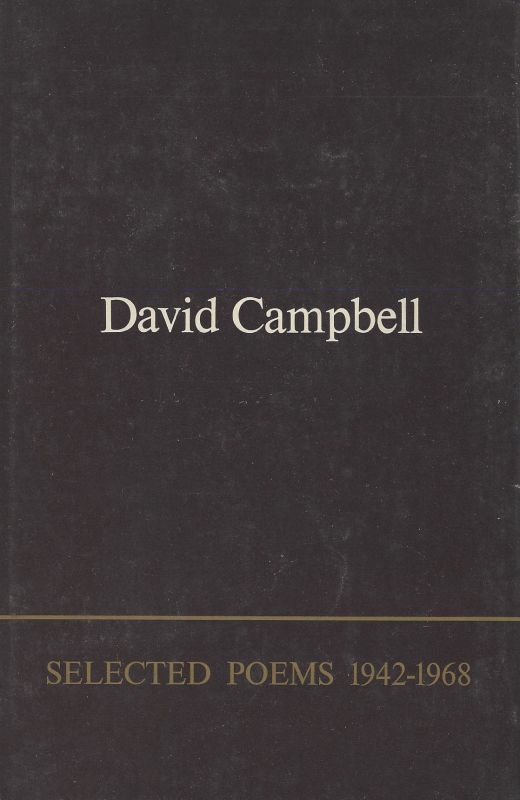