[Broecke 14ab.2; Koeman III, 9529+9610:31; Wolff, America S. 95; Lowery 65.].
A pair of stunning maps from the late 16th Century Theatrum Orbis Terrarum showing the northwest Pacific coast of Mexico and the Greater Antilles in the Caribbean. All these regions were first explored and settled by the Spanish in the 1490s and still under Madrid’s control when Ortelius produced his renowned cartographic work.
Among the settlements shown on the Mexican map are Culiacan and the Spanish settlement of Villa S. Michaelis with its cathedral clearly marked. Reliefs are depicted pictorially, with mountains and rivers identified and a large forest/grove also shown. A large, but narrow, island lies just off the coast.
Large decorative cartouche with Ortelius’s characteristic ornamental straps lies of the coast with explanatory annotations in Latin text. Smaller title cartouche in the top right corner of map also.
The map below illustrates the Greater Antilles, including the Cayman Magnus and the Caymanes, Cuba, ‘Aity, sive Spaniola’ (Hispaniola), Jamaica, the Bahamas, ‘St. Jois Insula’ (St. Johns), Virgin Islands and the Barbados Islands, all in fine detail. Havana is clearly identified along with other major settlements throughout the islands. St. Lucia is just about included, lying within the map border. The section of South Florida also shows suggestion of the Florida Keys, which was uncommon for this era. To the west, Yucatan can be seen breaching the map boundary. A decorative title cartouche, beautifully adorned with two birds, lies at the lower part of the map.
Unlike the waters of the Mexican map above it, the seas of this map appear choppy for the two ships depicted. Valuably laden Spanish galleons would have traversed these stretches of water, bringing the riches of the New World across the Atlantic to Spain. Making use of a knowledge of Greek Mythology two particularly perilous areas are designated: amid the Bahamas, a treacherous stretch of water is labelled ‘Carybdis Magna’ while off to the west of Hispaniola lies the dangerous ‘Scyila Magna.’
An interesting cartographic error is evident on both maps: the Tropic of Cancer is mislabeled as the southern ‘Tropicus Capricorni’. 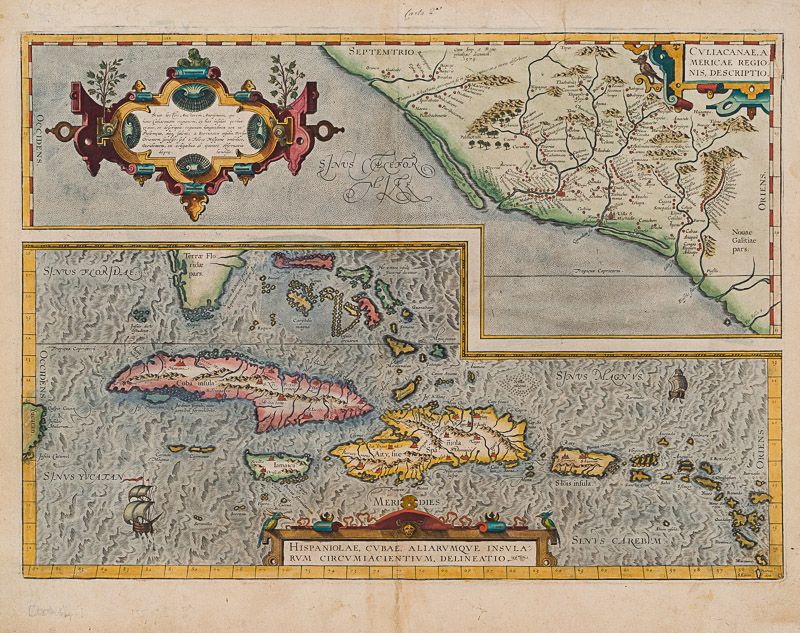 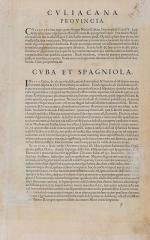