Bemis, Precedents of American Neutrality, in Reply to the Speech of Sir Roundell

Precedents of American Neutrality, in Reply to the Speech of Sir Roundell Palmer, Attorney General of England in the british Commons, May 13,1864.

The pamphlet includes: Expulsion and seizure of Genet’s privateers in 1793; The case of the Cassius; The case of the Santissima Trinidad and Judge Story on neutral duties; Judge Story’s Dictum in “The Amistad de Rues Case”; Retrospect of “The Alabama Case” – Her escape the result of British Treachery and official connivance or Negligence; American Treatment of French and British Alabamas in Washington’s Administration – Appendix: Extract from the speech of Mr.Thomas and the speech of the Attorney-General in full.

George Bemis, Esquire, (October 13, 1816 – January 5, 1878) was the preeminent Boston lawyer during the mid-1800’s. He was involved with many unique cases and was an advocate of international law and the reform of the treatment of criminals.
George was born at Watertown, Massachusetts, on October 13, 1816 the youngest son of Seth and Sarah (Wheeler) Bemis. He was an extremely conscientious and diligent student and when he was 13 years old he passed the entrance exam to Harvard College in 1829. Instead of enrolling at such a young age he continued with his studies for three more years. He finally matriculated into the sophomore class in 1832 and Graduated in 1835. He continued his studies by enrolling in Harvard Law School. He completed his formal education in 1839 and was admitted into the Massachusetts Bar in July of 1839.
Bemis was one of the most esteemed lawyers in Boston during the 1850’s and developed a profitable law practice while being involved in many famous legal proceedings. Bemis was a crusader for reform of the Penal code in Massachusetts, especially laws that allowed prisoner’s previous convictions to add to their current sentences.
In 1843 he was involved with the case of Abner Rodgers, who was an inmate at the Massachusetts State Penitentiary accused of killing the warden of that prison. During his defense of Mr. Rodgers, Bemis utilized an insanity defense. The results of Bemis defense led to Chief Justice Lemuel Shaw issuing an opinion that became the American authority on insanity plea during criminal prosecution.
The second major case that Bemis was involved in was the Parkman-Webster murder case. During this case Bemis acted as co-counsel to Massachusetts Attorney General John H. Clifford in prosecuting Harvard Professor John White Webster for the death of John Parkman. Bemis was selected, and paid $1,500, by the Parkman family to represent their interests in the case against Webster. This case was one of the first to use forensic and circumstantial evidence to prove a defendants guilt.
Bemis not only acted as a lawyer during these landmark cases, he also acted as a court reporter during each trial and eventually published his notes on each trial as the official transcription of the cases. At least in the the Webster case, the published transcripts from the trial was heavily edited and “slanted” so that the hanging of Dr. Webster was justified.
In 1858 he was struck by an hemorrhage in his lungs while arguing a case regarding railroads. Subsequently he moved to Europe for the remainder of his life. During this time in Europe he focused on the study of public law and published many pamphlets about neutrality in response to British positions on these topics. He died in Nice, France in January 18, 1878.
George Bemis, in his will, endowed the position of International Law Professor at Harvard Law School. “In his retirement he came to appreciate the need for an endowed chair which would support the advancement of knowledge and goodwill between governments. The Bemis Chair is given to a professor who is a “practical cooperator,” has had a connection with public life, and is capable of seeing the United States as one nation among many.” The chair is currently held by Noah Feldman. 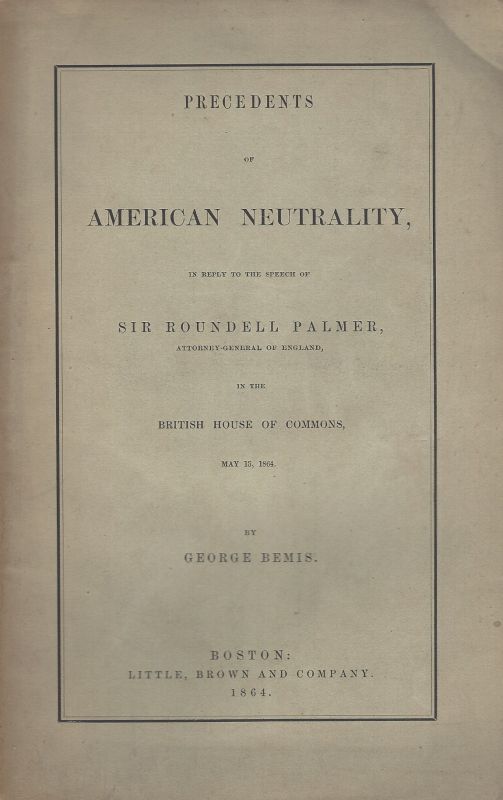