Everett, Address of the Hon. Edward Everett, delivered before The Boston Union C

Liverpool, Printed at the “Daily Post” Steam Printing Works, 1863. 8°. 32 pages. Softcover. Original Pamphlet. Original brochure. Some rubbing fo front cover. As one of the most notable rhetorics of his time, Everett later that year gave his famous Gettysburg Oration. In his speech to the Boston Union Club, he addresses the struggle of the country due to the Civil War.

Edward Everett (April 11, 1794 – January 15, 1865) was a Whig Party politician from Massachusetts. Everett was elected to the United States House of Representatives and United States Senate, and also served as President of Harvard University, United States Envoy Extraordinary and Minister Plenipotentiary to Britain, and Governor of Massachusetts before being appointed United States Secretary of State by President Millard Fillmore to fill the vacancy caused by the death of Daniel Webster. Mentioned in the book “The Perfect Tribute,” Everett was an unsuccessful candidate for Vice President of the United States in the 1860 election on the Constitutional Union ticket. In 1863 he delivered a two-hour Gettysburg Oration that has been eclipsed in history by President Lincoln’s two-minute Gettysburg Address, which Everett praised as superior to his own. He was the father of congressman William Everett and the great uncle of Edward Everett Hale.
Born in Boston, Massachusetts, to the Rev. Oliver Everett and Lucy (Hill) Everett, he attended Boston Latin School and graduated as the valedictorian from Harvard University in 1811, studied theology under the urging of the Rev. Joseph Stevens Buckminster, and was ordained pastor of the Brattle Street Unitarian Church, Boston, in 1814. He was the first American to receive a Ph.D.. His brother Alexander Hill Everett was a noted diplomatist and man of letters.
Everett was a professor of Greek literature at Harvard University, an overseer of the University, and its president from 1846 to 1849. He was elected to the United States House of Representatives and served from March 4, 1825 to March 3, 1835. He declined to be a candidate for renomination in 1834.

Everett also had a love for mathematics as can be seen from his probably most famous quote: ‘In the pure mathematics we contemplate absolute truths which existed in the divine mind before the morning stars sang together, and which will continue to exist there when the last of their radiant host shall have fallen from heaven.’
Everett served as Governor of Massachusetts from 1836–1840. He was then appointed United States Envoy Extraordinary and Minister Plenipotentiary to Great Britain from 1841 to 1845 and declined a commission to China in 1843. He served as president of Harvard University from 1846–1849.
In 1852 he was appointed United States Secretary of State by President Millard Fillmore to fill the vacancy caused by the death of Daniel Webster, and served until the end of the Fillmore Administration, March 3, 1853. He was elected to the United States Senate and served from March 4, 1853, until his resignation, effective June 1, 1854. On Thursday, April 6, 1854, he presented a petition from the people of Dedham against the Missouri Compromise and one from the people of Gettysburg, Pennsylvania in favor of securing religious freedom for Americans abroad.
Everett was an unsuccessful candidate for Vice President of the United States in the 1860 election on the Constitutional Union ticket.
Everett went to Germany to take courses and returned to this country as the first American to receive a Ph.D. degree. Eventually, 10,000 of America’s wealthiest families would send their sons to obtain the Ph.D. in Prussian universities.
Implementation of the Prussian education system was to become the goal of Edward Everett, America’s first Ph.D. As Governor of Massachusetts, Everett had to deal with the problem of the influx of poor Irish Catholics into his state (as a result of the Irish Potato Famine). In 1852, with the support of Horace Mann, another strong advocate of the Prussian model, Everett made the decision to adopt the Prussian system of education in Massachusetts.
Shortly after Everett and Mann began to adopt the Prussian system, the Governor of New York set up the same method in 12 different New York schools on a trial basis.
Evertt died in Boston and is interred at Mount Auburn Cemetery in Cambridge, Massachusetts. (Wikipedia) 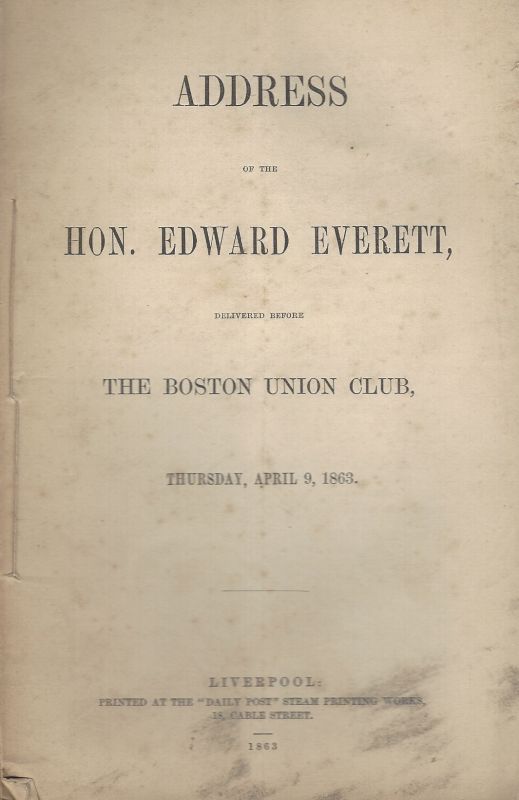