[Barton, The Antiquary - Volume I and Volume II of a 3-Volume-Set, with the Exli

The Antiquary – Volume I and Volume II of a 3-Volume-Set, with the Exlibris and name in ink of Anna Barton, daughter of Hugh Barton and Anne Johnston (relation to the Baron’s of Clarina).

Paris, Published by A. and W. Galignani, 1821. Small Octavo. VII, 221, 228 pages. Original Hardcover / Contemporary half-leather with beautiful ornament and lettering to spine. Interior with dampstain but otherwise in very condition with some minor signs of wear only. The two bookplates of Clarina in very good condition, bearing the family’s Motto: “Pro libertate patriae” / “For the liberty of my country”.

Baron Clarina, of Elm in the County of Limerick, was a title in the Peerage of Ireland. It was created on 27 December 1800 for General Eyre Massey. The third Baron sat in the House of Lords as an Irish representative peer between 1849 and 1872. The fourth Baron was an Irish representative peer between 1888 and 1897. The barony became extinct on the death of the sixth Baron on 4 November 1952.
Hugh Massy, 1st Baron Massy, was the elder brother of the first Baron Clarina. (Wikipedia) 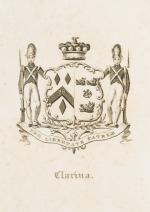