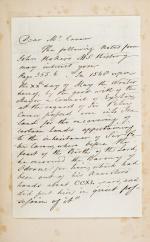 The Life and Times of Sir Peter Carew, Kt. (From the Original Manuscript) – With a Historical Introduction and Elucidatory Notes, by John MacLean. [Personal copy of John Carew Esq., with two unpublished manuscript letters by historian George Oliver, Exeter (Devon), tipped-in to the rear of the Volume, one longer manuscript entry to the rear in which George Oliver mentions that he has consulted the Inventory of Ottery Mohan House and that he has “made a few pencil notes in the margin” of the book (Oliver must have been sent the book and then returned it or it was his own copy and he gifted it to John Carew)/ George Oliver helped John Carew, Esq., a descendant of Sir Peter Carew, to identify some information form the original manuscript of John Hoker, to which Oliver must have had access. The letters deal with details of John Hoker’s [Hooker’s] Manuscript on Sir Peter Carew and details in John MacLean’s Biography of Carew. George Oliver’s correspondence with John Carew, a descendant of Sir Peter, is very interesting indeed and Oliver seems to study the original manuscript by Hoker for John Carew and reports his insight in the original manuscript of Hoker’s Manuscript on History, mentioning for example Carew’s death-notice: “This year died the worthy and Honorable Knight Sir Peter Carew at Ross in Leinster, and buried in the City of Waterford in Munster in Ireland, in all such honourable order…” (see detailed images on our website)].

London, Bell & Daldy, 1857. Octavo. Frontispiece portrait of Sir Peter Carew (Steel Engraving by J.J.Chant, being Plate I.), CXVIII, 317 pages plus 6 pages “List of Subscribers”. With several Plates: Plate II: Musical Notes: “By a Bank as I lay” / Plate III: Monument to Sir Peter Carew in St.Peter’s Cathedral, Exeter (Steel Engraving) / Plate IV: Folded Map of Kylkenny (Kilkenny) / Plate V: Pedigree of the Family of Carew (Large Fold – out Plate). Hardcover / Original publisher’s cloth with gilt lettering on spine and armorial emblemata on front board. With the armorial supralibro of the Carew Family to the binding’s front board: Arms of Carew: Or, three lions passant in pale sable / Manuscript-entry of previous owner John Carew on endpaper. Boards fragile and spine loosened. In protective Collector’s Mylar to give the slightly broken binding stability. A very rare publication with the beautiful, signed manuscript-letters by George Oliver, signed in the years 1857 and 1858. The letters are also of interest regarding the history of John Hoker [John Hooker / John Vowell] because George Oliver mentions Hoker’s entry “into the New Office of Chamberlain of Exeter at Michaelmas 1555 – having the fee of £4 by the yere & his Lyveries – MS. Hist. p.351”.