[Clerke, Collection of seven publications by and about Agnes Mary Clerke plus on

A mixture of first and later editions. Berlin / London, Springer / Cassell / Longmans & Green and others, 1889 – 1908. Octavo. More than 2500 pages with many illustrations and diagrams etc. / The vintage letter has two pages filled and signed by Clerke in ink / The only modern publication within the collection is a very important monograph on Clerke by scientist Mary Brueck / Mary Brück, published by Cambridge University Press (275 pages). Original Hardcovers in bespoke protective collector’s Mylar. Very good condition with only minor signs of external wear. A stunning collection of all the important publications by this important woman astronomer. Clerke paved the way for women in science and must be seen as the pioneer female astronomer. The price includes an upgrade to worldwide free shipping of the collection per DHL Express Courier.

Agnes Mary Clerke (10 February 1842 – 20 January 1907) was an Irish astronomer and writer, mainly in the field of astronomy. She was born in Skibbereen, County Cork, Ireland, and died in London.
Agnes Clerke was the daughter of John William Clerke (c. 1814–1890) who was, at the time, a bank manager in Skibbereen, and his wife Catherine Mary Deasy (b. c. 1819) whose father was a judge’s registrar. She had two siblings; her older sister, Ellen Mary, was born in 1840, and her younger brother, Aubrey St. John, was born in 1843. All of the Clerke children were entirely home schooled.
Following in her father’s footsteps—while studying classics, he had also taken courses in astronomy—she developed an interest in astronomy from an early age, using her father’s 4 inch telescope in her observations and had begun to write a history of astronomy at the age of 15. In 1861, aged 19, her family moved to Dublin, and in 1863 to Queenstown. At the age of 25, partly for health reasons together with her elder sister Ellen, she went to Italy where she stayed until 1877, chiefly at Florence, studying science, languages, and other subjects that would be useful in their later lives. In 1877 she settled in London. (Wikipedia)

Upon her return, she was able to get two articles, “Brigandage in Sicily” and “Copernicus in Italy”, written while she had been in Italy, published in the Edinburgh Review of October 1877. This led to her being asked by Adam and Charles Black, publishers of the Review, who also published the Encyclopædia Britannica, to write biographies of a number of famous scientists for the ninth edition of the encyclopedia. This work let to a number of other commissions, including the publication of the article on astronomy for the Catholic Encyclopedia. During her career she wrote reviews of many books, including some written in French, German, Greek, or Italian.
In 1885, she published her best known work ‘A Popular History of Astronomy during the Nineteenth Century’, which has received recognition beyond the time it was written.
Clerke was not a practical astronomer, instead collating, interpreting and summarising the results of astronomical research. In 1888 she spent three months at the Cape Observatory as the guest of the director, Sir David Gill, and his wife, and there became sufficiently familiar with spectroscopic work to be able to write about this newer branch of the science with increased clearness and confidence.
In 1893 she was awarded the Actonian Prize of 100 guineas by the Royal Institution. As a member of the British Astronomical Association she attended its meetings regularly, as well as those of the Royal Astronomical Society. In 1903, with Lady Huggins, she was elected an honorary member of the Royal Astronomical Society, a rank previously held only by three other women, Caroline Herschel and Mary Somerville in 1835, and Anne Sheepshanks in 1862. Her sister, Ellen Mary Clerke (1840–1906), also wrote about astronomy. She was a devout Catholic all her life. The lunar crater Clerke is named after her. In 2002, the retired astronomy lecturer Mary Brück wrote a book on her, Agnes Mary Clerke and the Rise of Astrophysics. In 2017, the Royal Astronomical Society established the Agnes Clerke Medal for the History of Astronomy or Geophysics, which is awarded to individuals who have achieved outstanding research into the history of astronomy or geophysics. The first person to receive the medal was Clive Ruggles. 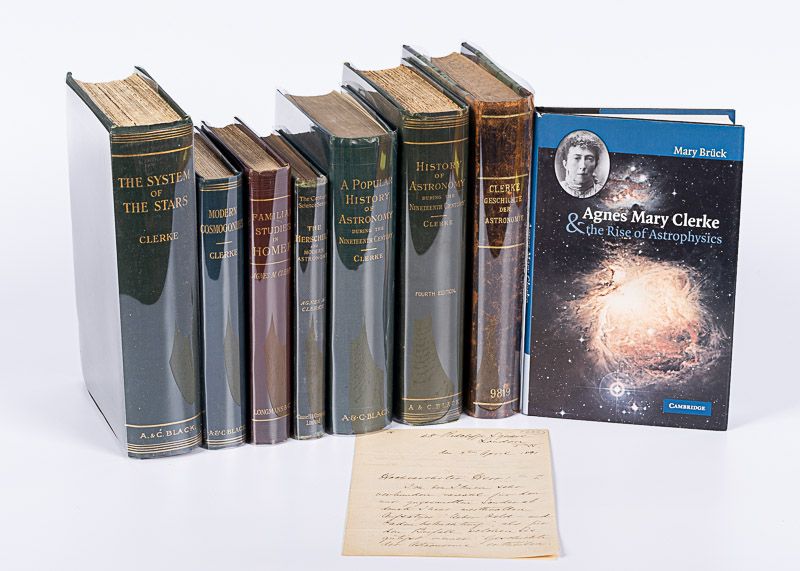 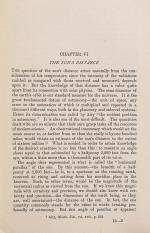 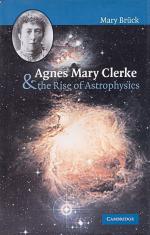