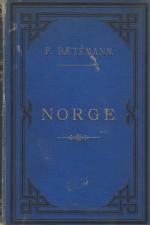 Nuremberg, Christoph Riegel, 1696. Original copper engraving from Pufendorf’s “De rebus a Carolo Gustavo”, this being Plate No.80 with an inset map of the border-region between Sweden and Norway at the end of the 17th century. Beautifully Framed. Size of frame with the copper engraving: 54.5 cm x 45.5 cm. Size of the actual engraving: c. 44 cm x 35.5 cm. Excellent condition.

Two Vintage Photo Albums / Portfolios of “Cruise No. 2 to ‘The Norwegian Fjords’ in June 1913 on the R.M.S.P. Arcadian”. Fantastic combination of two photo logbooks of one of the last trips for this beautiful passenger liner before she served with the Royal Navy and was sunk by a U-boat, the German submarine SM UC-74, in 1917. These luxury photographic records were created by Davey & Hackney, Alexandra Palace, London. I. Album One: On 24 pages (12 stiff cardboards with photographs on both sides) with 44 vintage high-quality photographs, the cruise was documented by not only focusing on the natural beauty of Norway but also by documenting the captain (Captain Custance) and crew of the Arcadian, one large photograph shows the captain and all his officers. Some striking images of the ship itself are showing this liner in all its glory. The ship was built in 1899 by Vickers, Sons & Maxim Ltd. for the Pacific Steam Navigation Company as SS Ortona. This unusually luxury Album also documents in an appendix with a small map of Norway the Itinerary of the cruise. All mileage covered and dates the cruise would reach the scheduled destinations in Norway are mentioned (Grimsby, Wed. 18 June / Leith, 235 miles, Thursday 19 June / Aalesund 493 Miles Sat. 21 June / and so on and so on). The cruise would stop at Molde (Moldefjord), Aandalsnaes (Romsdalfjord) / Oie (Jorundfjord) / Hellesylt (Sunelvsfjord) / Merok (Geirangerfjord) / Olden (Invikfjord) / Loen (Nordfjord) / Mundal (Fjaerlandsfjord) / Balholmen (Sognefjord) / Gudvangen (Naerofjord) / Sundal (Maurangerfjord) / Norheimsund (Hardangerfjord) / Bergen / back to Grimsby on July 2nd, 1913 with a total of 2127 miles covered in 14 days. The photographs of the “Arcadian” are differing in size from a beautiful full ship image in 17.5 cm x 28.7 cm to detailed photographs of the deck in 11.5 cm x 16.4 cm; a nice photo of the “Arcadian’s” Launch (with small steem funnel), interior of the ship (Dining Salon), a photograph of a visiting steam Tender (″The Grimsby Tender”), Deck tennis – scenes, Playing Bull Board, Letting go the Anchor with two crew members. / II. Album Two: This additional, smaller Album, on an additional 24 pages (12 stiff cardboards with photographs on both sides) shows a further 24 vintage, high-quality photographs. These additional photographs show The Hardangerfjord / Folgefond Glacier / An Arcade in the Dining Salon / Photograph of Captain Custance / Sundal / The Landing Stage in Norheimsund / Fysse / The Landing Stage in Trondheim with many locals waiting / The Landing Stage in Forhatten / Digermulen / The Raftsund Fjord / Lyngenfjord / A boat full of Lapps in traditional clothing, showing and offering livestock and handmade dolls for tourists on board the “Arcadian” / Hammerfest / North Cape & Midnight Sun from the “Arcadian” / Tromso, with a large gathering of schoolchildren / A Boxing Match on the “Arcadian”, showing two pugilists fighting it out to the bemusement of bystanders / Pillow Fighting as Pastime for Tourists on the “Arcadian” / Molde from the Hill, showing the “Arcadian” in the Fjord / Aandalsnes / View from Aandalsnes / Bergen and Bergen Harbour with a few nice local Yachts in the foreground // The quality of the photography in both of these Album is excellent. 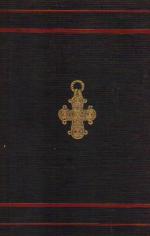 Sketches in Holland And Scandinavia. 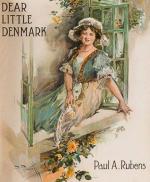 København and others, Christian Ejlers Forlag and others, 1930 – 1980. Octavo / Quarto / Folio. More than 10000 pages with many illustrations. Original Hardcover & Softcover publications. Several books with some stronger signs of wear but mainly the collection in very good+ condition with only minor signs of external wear. From the private reference library of Hans Christian Andersen-Translator Erik Haugaard in Ballydehob, West Cork, many with the personal Exlibris / Bookplate of Erik Haugaard, designed by irish artist Brian Lalor. 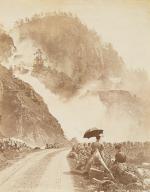 Den Norske Turistforenings Aarbok / Arbok. [1869 – 1957 complete with only the year 1872 missing / 82 Volumes including Hoved – Register by E.A.Thomle and Henning H. Tonsberg]. This is the Original Edition from the library of The Alpine Club, London.

82 Volumes bound in 70 Volumes. Christiania / Kristiania (Oslo, Norway), Albert Cammermeyer / Grondahl & Sons etc., 1869 – 1957. Oktavo and Large Octavo with one Quarto Volume. More than 12000 pages with hundreds of illustrations, photographs, maps and fold-out alpine panoramas and routes. Including Hardcover: 50 of the Volumes are bound in buckram with the vintage Alpine – Club Signet on the spine. The original illustrated brochures were bound in. The remaining volumes are bound in their original colourful wrappers. Excellent condition with only minor signs of external wear. Very rare and unusual set ! The longest, nearly uninterrupted run of this rare and collectable periodical. Withdrawn from the library of the Alpine Club iin London. With hundreds of articles on mountaineering, climbing, exploration of the Norwegian countryside and mountain terrain. The majority of the articles are in norwegian (Norge) but some are in english (by William Cecil Slingsby for example) and in german (for example O. Vorwerg). With many interesting original advertisements regarding mountaineering: Jagtrequisita, Velocipeder (L.H.Hagen & Co. in Christiania), Allright Cycler (Storm Martens, Christiania) // The price includes international free shipping ! 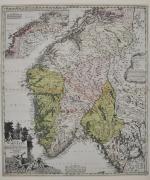 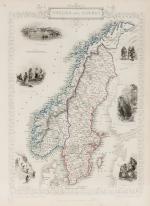 Sweden and Norway – with Vignette of Stockholm, and Depictions of Norwegian Peasantry, Norwegian Skielobere or Skate Runners, Norwegian Laplanders (winter dress), Iron Mine of Dannemora, Upsala and Peasants of Sweden.