[Shirley 176; Broecke 186.1; Koeman III, 0800H:31].
Beautifully unusual and richly decorated map of the Ancient World based upon the work of Claudius Ptolemy, from Ortelius’ Parergon (‘Supplement’). The depicted land masses of Europe, Africa and western Asia are largely in their modern configurations, although the place names on the map are based upon Ptolemy. The southern portion of Africa is missing and China is not included on the map.
A small number of cities, including Hispalis (Seville), Lutetia (Paris), Rome, Byzantium (Istanbul), Hierusalem (Jerusalem), Alexandria, and Memphis are identified.
Relief shown pictorially. The mythical Luna Montes (Mountains of the Moon) – the fabled source of the Nile – can be seen in the southern half of Africa. Madagascar is also included. The climate zones are shown as ‘Zona frigida et inhabitablis’, ‘Zona temperata et habitabilis’, and ‘Zona torrida, et ob Solis nimium fervorem a veteribus inhabitabilis credita.’ The tropics and Arctic and Antarctic circles are also shown. The ‘Zona frigida’ lying above the Arctic Circle and the region lying at the Equator are described as being inhospitable.
The border of the globe carries longitudinal and latitudinal information. The outer areas of the map are decoratively patterned and there is one inset roundel map in each corner, showing the different continents depicting (in clockwise order) Europe, Asia, Africa and the Americas.
Ortelius’ characteristic strapwork design ornaments the title cartouche above the globe as it does the cartouche seen beneath it. It bears the inscription: “En Spectator Pilae Totius Terrae Ichnographiam, at Veteribus Usque ad Annum Salutis Nonagesimum Secundum Supra Milles Quadrigent. Cognitae, Tantum Geographiam.” Immediately underneath the illustrated landmass is a further cartouche, similarly ornamented, decorated with two lion heads and bearing an oval inset statement of responsibility in Latin script.
The Parergon was, conceived initially as a supplement to Ortelius’ Theatrum Orbis Terrarum (Theatre of the World). The work, a vast and finely researched index of the Classical world, was accompanied by a number of ancient world maps. Unlike the maps of the Theatrum, the majority of which were reductions of earlier maps, the maps of the Parergon were researched and drawn by Ortelius himself. The work was a great commercial success, and the maps themselves set the standard for ancient world maps for the duration of the 17th Century. 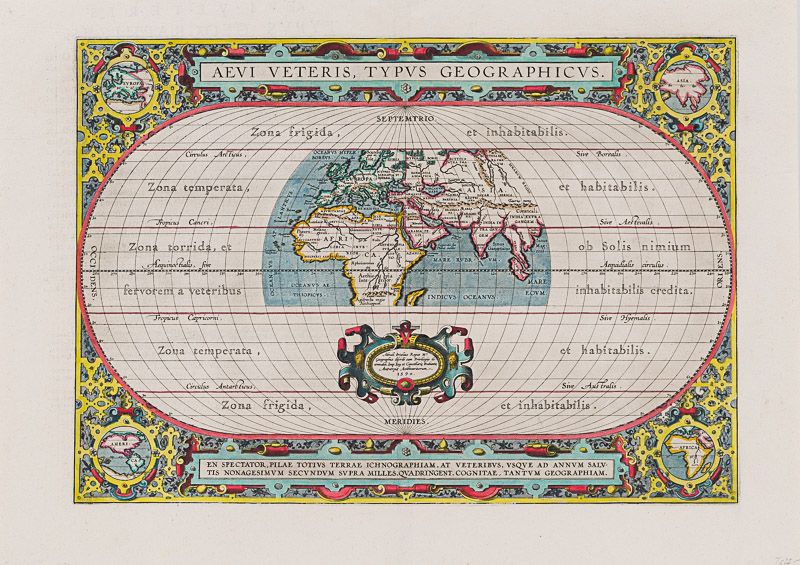 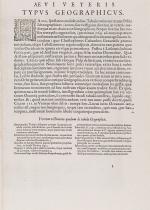