The Nature and Origin of Living Matter. With 245 illustrations from photomicrographs. 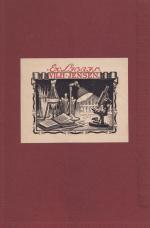 Wiesbaden / Leipzig / Berlin / Marburg , Thieme / Elwert / u.a., 1890 – 1914. Octavo. Original Softcover. Very good condition with only minor signs of external wear / The earliest offprint by Behring and Nissen, with a faded dampstain to lower margins / Otherwise with some minor fraying to some of the offprints only. Rare, important collection and very interesting association between Emil von Behring, the first Nobel Laureate of Medicine and Dr.Hans Sachs, jewish serologist and pioneer in efficient diagnosis of syphilis and one of the sad examples of the purge of scientists by Hitler’s regime in 1930s germany. / The collection also comes with several important works of Reference including: 1. A copy of Derek S. Linton’s stunning work: “Emil von Behring – Infectious Disease, Immunology, Serum Therapy” – [Philadelphia, 2005] / 2. also part of the collection is Arthur M. Silverstein’s work on “A History of Immunology” – [San Diego, 1992] see images of this collection !

Two Manuscript Books of Laboratory Notes by student of bacteriology and later publisher of “The Causes of Tuberculosis”, Louis Cobbett (1863 – 1947), dealing in these lab notes with the discovery of remedies for Tuberculosis and Diphtheria. Original, two-volume Manuscript-Compendium of research-notes regarding all the important discoveries in Bacteriology (Diphtheria and Tuberculosis) by contemporaries of Louis Cobbett during the years 1885 – 1908 (Behring, Koch, Metchnikoff etc.). The notes were started by Louis Cobbett in 1885, after graduating from Trinity College, Cambridge and while he was working towards his degree in 1899. The stunning documents are not only reading like a first-hand-journal of discoveries, citing and reflecting on all the important developments and medical advancements of the outgoing 19th and beginning 20th century, but these notes were written parallel to Robert Koch, Emil von Behring and others making their breakthrough discoveries for mankind’s desperately needed cures against Tuberculosis and Diphtheria. Cobbett reflects on the publications in the “Zeitschrift fuer Hygiene” and separately published books and articles. Louis Cobbett lists all the important and also the critical publications leading up to (for example) Koch’s discovery of Tuberculin (e.g.: Beck – “Ueber die diagnostische Bedeutung des Kochschen Tuberculins”), he mentions Emil von Behring, Paul Ehrlich’s “Ueber die Constitution des Diphteriegiftes”, he cites A.Jeffery Turner’s “Statistics on the Diphtheria mortality of the 3 principal Australian Colonies for the past 15 years” (published in 1899), he writes about Tuberculin production in fowl, he reflects on A.Calmette and G. Guerin, “supporting [Emil von] Behring in his contention that pulmonary tuberculosis is of intestinal origin”. Other mentions are “TB of human origin (from a cervical gland)”, he speculates on the publication by Fiebiger and Jensen regarding the transmission of tuberculosis from human to animal, he offers drawings of cultures with Rabbit emulsions, Bovine Characters, Avian cultural characters etc. A few lectures are referred to, including one by Sims Woodhead, a colleague of Louis Cobbett and no doubt attended by Cobbett himself; one newspaper report has been pasted in: ‘Important conference’ in Leeds, from Yorkshire Post 1899 / Louis Cobbett intensely elaborates on Kossel and his report on the english Tuberculosis – Commission in 1908 (H. Kossel – Die Tuberkulosefrage und die Arbeiten der englischen Tuberkulosekommission).

[Cambridge], c. 1885 – 1908. Octavo (17 cm x 21 cm). 90 blank leaves with manuscript entries in each volume, usually written on rectos only. Hardcover / Original half leather with dark blue cloth-covered boards bearing paper-labels to covers, detailing some of the sources cited within; marbled endpapers and edges. Very good condition with only minor signs of external wear.

Dear Mr Darwin Letters on the Evolution of Life and Human Nature.

The New Prometheans. Creative and Destructive Forces in Modern Science. 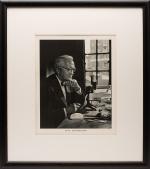 Original, limited photographic print on hand-made paper. Printed on Bristol paper board, satinized very white, 320 grams. [Lucerne, Switzerland], [C.J.Bucher Ltd.], [1976]. Size of the vintage print: 35 cm x 45 cm. Size of the framed print: 55 cm x 62 cm. Excellent condition (mounted). Frame with minor signs of wear only. From a portfolio of 12 photographs produced for the benefit of the Oliver Wendell Holmes Endowment of the Francis A. Countway Library. One of a limited edition of 590. Price includes international shipping, framed and insured, per courier (3-5 working days guaranteed delivery).

Almost Like A Whale: The Origin of Species Updated. 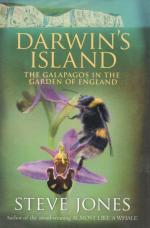 Darwin’s Island: The Galapagos in the Garden of England.